Bateer went on to enjoy a few years in the NBA. He started out as a training camp signee of the Denver Nuggets in 2002, yet was waived before the season started. He thus went back to China and averaged 24.3 points and 14.2 rebounds per game for Beijing, before returning to the Nuggets in February 2002 to see out the season with them. Bateer played in 27 games for that God awful Nuggets team and even squeezed out 10 starts, averaging 5.1 points, 3.6 rebounds and 3.5 fouls in 15 minutes per game. You’ll no doubt have noticed that that’s a lot of fouls.

That offseason, Bateer – who had been signed through 2003 – was a throw-in by Denver in the trade with Detroit that saw him, Don Reid and a first-round pick swapped for Rodney White. That pick was later traded to Atlanta (who used it on Josh Smith) as the centrepiece of the Rasheed Wallace deal; in a way, therefore, Mengke Bateer was an integral part of building the 2003-04 NBA champion Detroit Pistons. An underrated bad Kiki Vanderweghe trade, that one. (It was perhaps overshadowed by the fact that it came in the same offseason as the drafting of Nikoloz Tskitishvili, a move you may have heard about.)

Nevertheless, despite how much Bateer had brought to the franchise, Detroit moved him on without him playing a game for them. He was traded to San Antonio just after camp opened in exchange for a 2003 second-round draft pick, one which the Pistons then used on Andreas Glyniadakis. Bateer spent the whole year with the Spurs, but played only 46 minutes in 12 games, racking up another 14 fouls in that time and posting a PER of -8.4. His most significant contribution to that season was coming in and shooting two free throws in a game as an injury replacement, selected by whoever the opposing team was, presumably after they took one look at him and assumed he was terrible at foul shots (which he isn’t; far from it, in fact). Bateer obliged them and missed them both. They were his only foul shots all season.

Despite it all, Bateer won an NBA championship ring that season, the first Chinese player to ever do so. The only other one to have done has been Sun Yue. It’s hard to say who was more important to their teams respective titles, but the stats give the edge to Mengke; his -8.4 PER for the Spurs in 2003 practically destroys Yue’s -8.6 PER for the Lakers in 2009. Represent.

The Spurs let Bateer go that offseason, even though he’d helped them win a title. At that point came Toronto, who signed him to a two year minimum salary contract, clearly identifying a player who had now been an integral part of two NBA championship teams (even though this was still 2003 and one of them hadn’t happened yet). But Mengke played in only 7 games for the Raptors – totalling 40 minutes and 7 fouls – before being moved on again when he was traded to Orlando for Robert Archibald. Toronto also gave up the rights to Remon Van De Hare in that deal, as well as the right to swap 2005 second-round picks, a right which was exercised when Orlando moved up from 41st (Roko Ukic) to 38th (Travis Diener). You have to love deals like that, and not just because it has a hairy chested Scotsman in it.

Orlando waived Bateer almost immediately after trading for him, and he never played in the NBA again. Bateer saw out that season in the D-League, went to training camp in 2004 with the Knicks and in 2005 with the Cavaliers, but he never again saw an NBA court. This is mainly because he never got any faster, and thus never stopped fouling. His NBA career ended with totals of 46 games, 494 minutes, 156 points, 114 rebounds and 118 fouls; for per-36 fans, that’s 11.4/8.3/8.6. Almost a triple double. Except with fouls.

Bateer has been been back in China ever since, averaging 13.8 points, 9.6 rebounds, 3.9 assists and 3.0 fouls this season for Xinjiang. Recent posts on this website about Mengke Bateer have featured this picture of him; 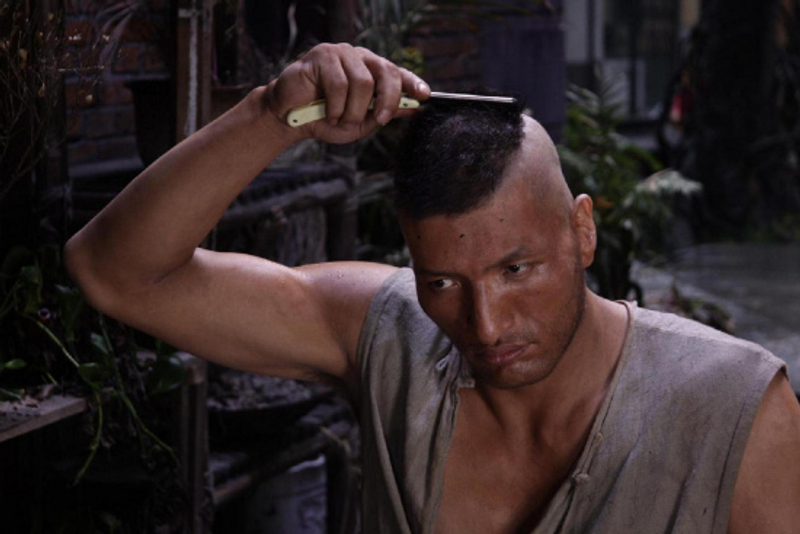 That is Bateer dressed as a bloody enormous monk, not because of some fetish of his, but because of his side career as an actor. And that’s another true story.

In addition to continuing his basketball career, Bateer has also begun a move towards whatever the Hong Kong equivalent of Hollywood is called. He first appeared in a film called “The Blue Xanadu” back in 2005, and the above monk photo comes from a film called “Bodyguards And Assassins.”

Body & Ass is reputedly one of the most eagerly anticipated and expensive films to come out of Hong Kong cinema in a generation, with a hype fuelled in no small part by repeated delays in its release. The trailer certainly makes it look slick, and better still, Bateer’s part is no small cameo. In the film, he plays an outcast monk (obviously), going by the slightly awesome name of Wang Fuming, who moonlights as a tofu vendor. There are not enough films these days written about 6’11 monk salesmen, but Bateer pulls the part off with remarkable aplomb, as you can see in this clip where he kills dudes with coconuts and proves to be nigh-on impossible to kill.

Apparently being stabbed 150 times by a swarth of hate-driven stampeding hitmen armed with stabby things is not a certain death in this alternate reality. Not compared to, say, a coconut in the face. Nevertheless, despite the artistic license taken with the realism in the action scenes, the film does look kind of awesome. And any help as to what the caption above Bateer’s strewn corpse says would be most welcome.

Bateer is set to appear in another film, Arrival of Fortune God, which has finished filming and which is due to be released later this year. A quick Google reveals no English language information about the film, or about Mengke’s role within it, but it does reveal this picture;

This can only end well.

10 Comments about Mengke Bateer Is A Coconut Wielding Homicidal Badass