Yao Ming - Yao has returned to Jiao Tong university in Shanghai to study economics, and is active in animal welfare. He is also absolutely terrible at golf.

[...] The All-Star game itself was not half bad, either. The first and thus far only All-Star game to go to double overtime, it saw 300 total points scored, an in-his-prime Allen Iverson doing what an in-his-prime Allen Iverson did at All-Star games, and an in-his-prime Kevin Garnett dominate proceedings on his way to the MVP trophy. Shaq faced off with Brad Miller for the first significant time since Shaq tried to kill him, an amusing in-game report spoke of Antoine Walker and Paul Pierce’s outrages at playing so few minutes, Yao Ming looked woefully out of place on his way to two points and two rebounds, and the close finish saw the game’s very best turn up the intensity and play at something resembling their very hardest. It was good fun to watch, right down to the Zydrunas Ilgauskas experience. Even the 52 turnovers were aesthetically pleasing.

[...] Ric Bucher, barely heard from tonight, chimes in to report that Yao Ming will not play for any team other than Houston Rockets, and that he may also never play again. Jeff Van Gundy tries to brighten the mood by reflecting upon how good Yao was and how nice of a person he is, but it's futile. The NBA has lost one of its most unique and entertaining players. It's going to be a hell of a long time before we see another even slightly like Yao. 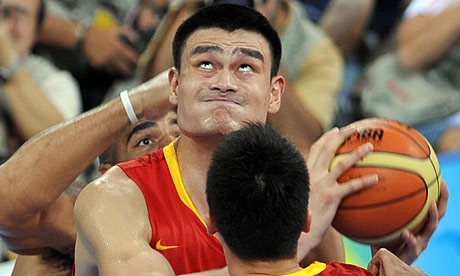 I've really enjoy Yao Ming, and it's a shame we could never enjoy him more.