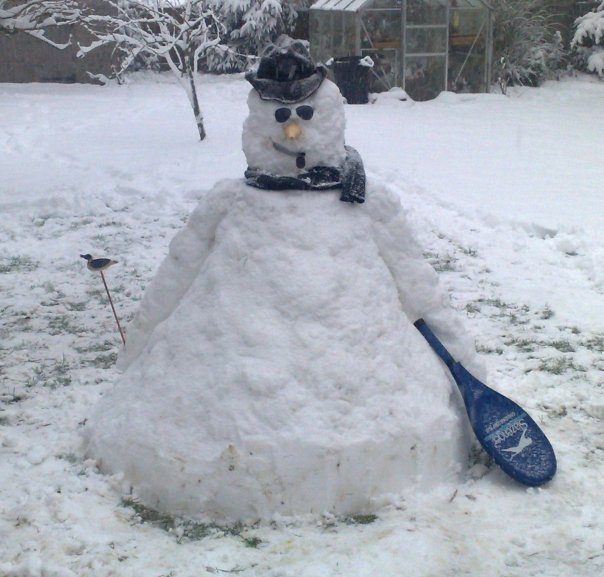 Experienced snowmen builders out there will have noticed a few faults in my technique. For example, it’s plain to see that I’ve fallen into the usual rookie trap of making a base that is way too big, overestimating what I will have the patience to achieve, and then having to hurriedly heap snow on top, crudely falling into kind of a cone shape, making my snowman’s body resemble a sumo wrestler melting. Additionally, I don’t have any coal, so the classic coal eyes have had to be replaced by a pair of police aviators. I also didn’t have a carrot, so a parsnip suffices as the nose, and insulating tape forms a rudimentary mouth shape for no particular reason. I also have no explanation as to why he is holding a retro early 90’s tennis racket, or a duck on a stick, but these additions seemed vital at the time. As did the Stetson. But I’m proud of it anyway, because it’s my first one. And everyone remembers their first time.

Why haven’t I built one before? Well, because it’s never snowed like this before. And why am I telling you all this? Because I felt like it. Anyhoo. To some basketball stuff.

– Serge Ibaka played in the LEB Gold last year, and has upgraded to the ACB this year. He’s not tearing things up at the moment, with sedate averages of 6.1 ppg, 4.0 rpg and 1.0 bpg, but those numbers are pretty good from a 19-year-old in the ACB. So much so, in fact, that according to ESPN’s Chris Sheridan, his rights are hot property.

– Mile Ilic is also in Spain and the ACB, playing for Cajasol Sevilla, the team currently in last place. Ilic isn’t really helping, as he averages 2.2 points, 2.2 rebounds, 0.6 blocks and 1.6 fouls per game through 12 games. Those numbers improved to 6.7 points and 3.3 rebounds in EuroChallenge play, but, now aged 24, excuses of rawness are running thin.

– Ersan Ilyasova is one of the highest paid players in Europe, and is still a restricted free agent of the Milwaukee Bucks. However, rumours instead of being the 21-year-old Turk that we believe him to be, he might actually be a 24 year old Uzbekistani, if unconfirmed reports are telling the truth. Ilyasova averages 10.4 points and 8.1 rebounds in the Spanish League for Barcelona, along with 9.6 points and 6.9 rebounds in the EuroLeague.

– Jermaine Jackson is with Snaidero Udine, who currently place last in Italy’s Serie A. Jackson averages 8.1 points, 5.8 assists and 3.3 steals, as the passer to Rashad Anderson’s scorer, but hasn’t played since December due to a groin injury, and has returned to the US to get it looked at.

– I’ve no idea what Jim Jackson does now, but the answer is not ‘playing professional basketball’.

– Luke Jackson is back in the D-League, averaging 16.7 points, 5.0 rebounds, 4.1 assists and 3.4 turnovers for the Idaho Stampede. Will he ever make it back to the NBA for more than three weeks at a time?

– Marc Jackson is back to doing what he does best – bouncing around Europe, finding work in whichever country he can get. As far as I can tell, though, he doesn’t have any right now. Jackson signed with UNICS Kazan for preseason, but he doesn’t appear to be on their roster, or their season statistics, and I watched a UNICS Kazan game last week in which Jackson wasn’t even mentioned. So I’m guessing he’s not there any more. (By the way, here’s something that I learnt from that game: Vladimir Veremeenko = skilled, versatile, a bit clumsy.)

– Casey Jacobsen is back in Germany, the country that was so good to him back in 2007. For ALBA Berlin, Jacobsen averages 10.0 points, 2.9 rebounds and 1.2 assists in the German league, along with 6.3 points, 2.8 rebounds and 1.2 assists in the EuroLeague. Unfortunately, on the latter stage, Jacobsen’s shot has left him (just like it did last season) – he’s shooting only 33% in EuroLeague play, while shooting almost exclusively three-pointers. But in the German league, Jacobsen averages 1.62 points per shot, and anyone who knows me knows how much I love that metric. It’s like true shooting percentage for lazy people. Good times.

– Jan Jagla is with DKV Joventut Badalona in Spain, a team that features heavily throughout this list. (Or at least, it will do.) Jagla averages 7.0 points, 3.0 rebounds, 0.7 steals and 0.9 blocks in 17 minutes per game in the Spanish league, rising to 9.0 points, 3.3 rebounds and the same defensive stats in an extra minute per game in the EuroLeague.

– Sarunas Yassercabbages is with Panathinaikos, as he has been since falling out of the NBA. For Panathinaikos, Jasikevicius is doing the thing he couldn’t do in the NBA – producing. His averages (10.9 ppg, 2.9 apg in the Greek league, 8.0 ppg and 2.3 apg in the EuroLeague) might not seem like much, but that team is stacked. You’ve got Jasikevicius, Dimitris Diamantidis, Vassils Spanoulis, Antonis Fotsis…..and they’re just the players whose names end in S.