Novica Velickovic did what all good Partian youngsters do eventually; he left. Partizan are forever churning out quality youth, but they haven’t the budget to keep them long term, and so Velickovic, Milenko Tepic and Uros Tripkovic all left last summer. (It didn’t hold back Partizan, who found enough good quality pick-ups to make the EuroLeague Final Four this season.)

Wizards draft pick Veremeenko has spent another year with Unics Kazan, still doing his impression of an entry-level Linas Kleiza. His numbers were slightly down this year on a deeper Kazan team, averaging 8.5ppg/4.2rpg in the VTB United League, 8.5/5.3 in the EuroCup and 7.6/4.1 in the Russian Superleague.

He is the only Belarusian player we will be covering.

Bulgarian international Videnov – who once played for Western Kentucky, something I hadn’t initially realised – started the year with Crvena Zvezda in Serbia. He averaged 8.9 points and 2.7 rebounds per game in the EuroCup, and 13.9 points and 3.2 rebounds in the Adriatic League; however, like almost all of Crvena Zvezda’s veterans, Videnov left when the money ran out. He moved to another Serbian team, Zeleznik, for whom he has averaged 13.1 points, 5.1 rebounds and 3.3 assists per game in the Serbian league.

He is the only actual Bulgarian person we will be covering. Mike Batiste and Ibrahim Jaaber don’t count.

Former Hornets forward Vinicius went back to his native Brazil for a couple of years after falling out of the NBA, and last year ranked second in the NBB with a 22.8 ppg scoring average. This year, he’s returned to the big time and played for Sigma Montegranaro in Serie A, for whom he has averaged 11.1 points and 3.2 rebounds per game (numbers which would be better had Vinicius not gone scoreless in three straight games to end the season). Vinicius has shot 60-152 from two-point range, and 61-152 from three-point range; if you were not aware of his style of play before now, then those stats are a good indication.

Vinicius averaged 13 points and 3 rebounds in Montegranaro’s first round playoff series against A.J. Milano (and his wife Alyssa), but his team were swept anyway.

Journeyman shooter Vinson grafted his way through a 13-year minor league career that took him to places such as Poland, China, Dominican Republic, France, Italy, and Paul Shirley’s book. Some of his career was spent in the voguish American minor leagues of the day – the CBA and the ABA – as Fred worked to get the occasional NBA gig. In fact, he cracked the big league twice in that time, playing 27 minutes for Atlanta in November 1994, and a further 40 minutes for Seattle in the 1999/2000 season. Vinson last made the NBA in 2005, when, aged, 34 and with only an hour of NBA experience under his belt, the Clippers signed him for training camp. With hindsight, we can see an ulterior motive here; when Vinson finally gave up his playing career two years later, the Clippers hired him as a shooting coach.

Despite retiring from regular playing in 2007, Vinson still dusts off the cobwebs every summer to play in the IBL. The IBL is a very minor league with no coverage here, other than the exploits of one team; the Los Angeles Lightning. Last summer [the IBL plays in the summer], the Lightning churned out a veritably stacked roster of people you’ve heard of; Lamond Murray Jamal Sampson, Bryon Russell, Toby Bailey, Juaquin Hawkins, Adam Parada, California State senator Tony Strickland, and Darrick Martin. Some of those, such as Vinson, were retired players (or politicians) just looking to scratch their playing itch; some (Parada, Sampson, Murray) were still playing professional careers and just wanted a little summer gig. Either way, the team was stacked, and the Lightning breezed to the IBL title.

This year’s Lightning aren’t quite as stacked, but some of those names remain. Russell, Vinson, Hawkins and Strickland are still there, and the 6-0 Lightning are still winning. In their last game, Vinson totalled 33 points and 8 assists; Russell had 23 points, 9 rebounds and 5 assists; Hawkins had 10 points and 8 rebounds; Strickland had a three trillion. The Lightning won by 15.

Ex-Wake Forest centre Kyle Visser has spent his whole professional career in Germany, a league that suits his style of play (i.e. grounded). He moved from New Yorker Phantoms Braunschweig in the summer to join EnBW Ludwigsburg, and averaged 10.7 points and 4.9 rebounds, shooting 59% from the field and 55% from the line. Visser also averaged 3.4 fouls in only 24 minutes per game, so no change there.

Despite his 0.7 PER for Toronto last year, Dallas brought in Voskuhl for training camp, and reportedly really liked him, so much so that they considered opening up a roster spot for him. They didn’t succeed in this aim – getting only as far as trading Nathan Jawai to Minnesota before deciding to keep Shawne Williams solely for his expiring contract – and Voskuhl has not signed elsewhere since. Even when Dallas traded Williams and Kris Humphries to New Jersey for Eduardo Najera, thereby opening up that coveted roster spot, Voskuhl didn’t get it; the Mavericks signed Von Wafer instead, and then filled the spot later with their trade with the Wizards. Voskuhl has thus remained unsigned all season. The Nuggets considered him, but went elsewhere.

Ian Vougioukas fact: Ian Vougioukas was born in London – the English one, not the Canadian one. Unfortunately, we can’t have him, for he has played for the Greek national team at U-16, U-18, U-20 and U-21 level. And that’s a pity. Andy Betts and Robert Archibald won’t be around forever.

It has been mentioned several times in this series of posts about the fairytale run that Partizan Belgrade have had this summer. In fact, it was mentioned to start this post. But here it is again. Despite an extended refit over the summer that saw them lose many senior players – whom, in the cases of Uros Tripkovic, Milenko Tepic and Novica Velickovic, had been homegrown talents – Partizan didn’t have the budget to keep them, so they had to continue the cycle of letting them go and retooling from within. Nevertheless, they found sufficient talent in their young players and under-the-radar signings to make it all the way to the EuroLeague Final Four this season, a phenomenal achievement for such a comparatively small market team.

Slavko Vranes was one half of Partizan’s centre tandem. Backing up Aleks Maric – who had a fantastic year – Vranes averaged 4.0 points, 4.6 rebounds and 1.5 blocks per game in the EuroLeague, 4.5/5.7/1.4 in the Adriatic League, and 5.5/3.9/1.4 in the Serbian league. Now 27, Vranes never developed much of an offensive game, and nor did he get the necessary 37 times faster to thrive in the NBA. But he’s still 7’5, and capable enough to play in the rotation for one of Europe’s better teams. Not a bad career, all told, albeit not quite enough to justify being picked 39th overall in 2003.

(If we play the always-fun Draft Hindsight game, we can see that players picked behind Slavko that year include Matt Bonner, Willie Green, Zaza Pachulia, Keith Bogans, James Jones, Kyle Korver and Mo Williams. This doesn’t really mean anything, but it’s fun nonetheless.)

Despite being a key component of the trade for Luol Deng, Vroman’s NBA career didn’t last very long. He played only 87 games over two seasons with the Suns and Hornets, putting up a PER of 8.2, before being waived in March 2006 and never returning. Following his NBA career came a year and a half in Spain, a few months in Lithuania, and then two years in Iran, where he remains to this day. Vroman has played for Mahram in a multitude of competitions, and has averaged 26 points per game for them in the preliminary round of the Asian Club Championships.

He seems to be enjoying himself, too: 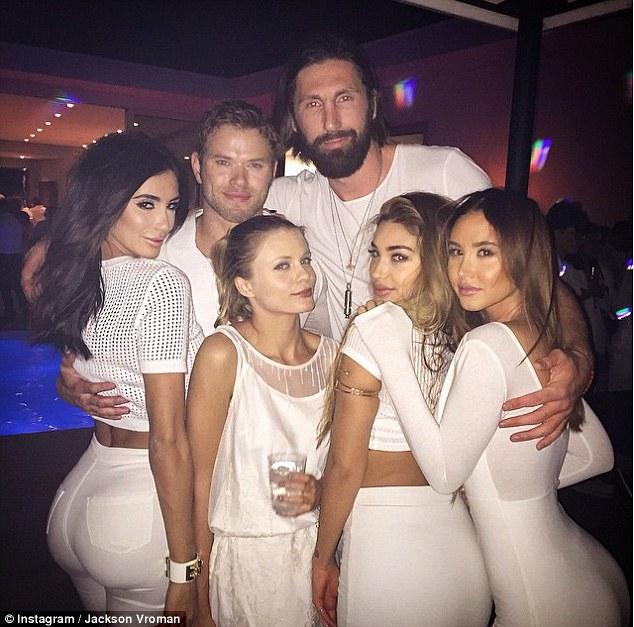 The future of the Knicks, Milos Vujanic, led Spain in turnovers this year. Spending the season with C.B. Murcia, Vujanic averaged 17.7 points, 2.4 assists and 3.9 turnovers per game, and was unable to prevent them from being relegated to the LEB Gold for next season. But this probably has more to do with the fact that the team had no other double-digit scorers than it did with Vujanic’s turnover problem.

If the Knicks come out of this summer still needing a point guard, the Suns will probably renounce Vujanic’s draft rights if you ask nicely.