Since his surprising and ultimately irrelevant “comeback” with the Grizzlies in 2007, McKie went back to where he already was; on the Philadelphia 76ers bench as an assistant coach. He did not play for the Grizzlies at any point. Probably best.

Looking to get back into the NBA, Keith McLeod has spent a second season with the Albuquerque Thunderbirds of the D-League. His numbers this year were up across the board from last year; McLeod averaged 21.8 points, 5.6 assists, 3.7 rebounds and 1.9 steals per game, and even shot 39% from three-point range. However, McLeod shot only 40.0% from the field overall, which suggests he hasn’t mended his lay-ups problem, and also turned it over three times a game. The points per game were nice, but I don’t think 30-year-old 6’2 jump shooters are getting it done.

Despite being on the Utah Jazz roster as recently as 18 months ago, Gerry McNamara has retired from basketball. He did so about a year ago, actually. After leaving the Jazz, McNamara went to the D-League for a bit with the Reno Bighorns, but professional basketball in front of sparse crowds didn’t hold the same lustre that his Syracuse days did. So he retired last April to return to Syracuse as an graduate assistant coach, where he remains today. And that’s fair enough. If he doesn’t want to do it, then why should he?

Marquette star McNeal joined the Kings for summer league after going undrafted, joining up with his former team mate Wesley Matthews. He got to play quite a few minutes with the team, but they were mostly at point guard, and McNeal still isn’t one. He didn’t get a contract offer from the Kings, and although he did go to camp with the Clippers, he lost out on a roster spot to Kareem Rush. After being released, McNeal went to Belgium to play for Dexia Mons-Hainaut, for whom he averaged 15.3 points and 2.4 assists in Belgian league play, alongside 15.5/3.5 in the EuroChallenge. However, he was sent home by the team two weeks ago after testing positive for cannabis, and was released yesterday.

Medvedenko played in only two games in the 2005-06 season with the L.A. Lakers, and appeared in 14 more with the Atlanta Hawks down the stretch of the 2006-07 season. But that’s it. That was his career. Even though Slava turned 31 only this week, he has not played outside of the NBA at any point, and hasn’t played in it for the best part of five years.

The internet does not carry much news about the life and times of Slava since then. But what it does carry is rather surprising. Slava had a minor cameo in a film called – and I quote – “Oy Vey! My Son Is Gay!!”, a no doubt classic Carmen Electra comedy for which a trailer can be seen here. If that seems like a mistake, and that IMDB has jumped the gun and assumed that the guy in the film called Slava Medvedenko is THE Slava Medevedenko when it’s actually some other dude of the same name, then fear not, because it really is Slava. Here he is in character. 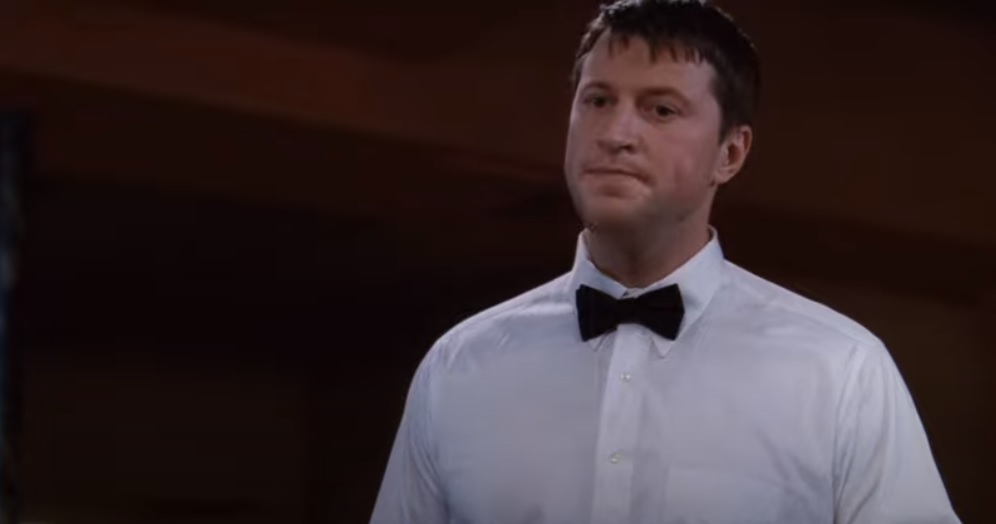 This appears to be not only the start of Slava’s acting career, but also the end of it. It is Slava’s only listed appearance on IMDB in any show, apart from the 2004 NBA Finals, which were another fine cameo of his but which can’t really be called acting. Nevertheless, if this is the start of Slava’s new career path, quenching Hollywood’s relentless thirst for “Freakishly Tall Men With Foreign Accents”, then I’m all for it.

Meeking was a D-League All-Star last year, and celebrated his appearance by cranking up threes. He then joined the Puerto Rican contingent in the summer, averaging 14.2 points and 6.8 rebounds for Humacao, and has spent this year in the Turkish second division. He is averaging 15.0 points and 8.8 rebounds, shooting 38% on three-pointers, his new favourite toy.

Former Pistons draft pick Mejia is signed in Cholet with France. Teammates there include Mickael Gelabale, Antywane Robinson and upcoming draft prospect Kevin Seraphin. Cholet never got out of their group stage in the EuroCup – a tough group involving Benetton Treviso, Dynamo Moscow and Crvena Zvezda – but they’re right there in second place in the French league, just one game behind Le Mans. Mejia is one of the leaders of that title push, averaging 13.3 points, 3.6 points and 2.6 assists per game.

Cholet’s coach is Erman Kunter. Erman Kunter once scored 153 points in a game. I think I’ve mentioned this before, but even if I have, it’s worth mentioning again.

Wisconsin-River Falls’ finest Rich Melzer spent this year in the Australian NBL, where he averaged 10.9 points and 4.8 rebounds per game for the Skytrans Cairns Taipans. The NBL season has already finished, even if this series of posts has just cracked halfway, and Melzer returned to American to play the last two games of the D-League season with the Rio Grande Valley Vipers. In two games he totalled 25 minutes, 11 points and 8 fouls.

England’s finest Pops Three Whales started the year with the Rockets, unable to secure any guaranteed money this offseason despite his strong finish to last season. The Rockets waived him before one of his multiple contract guarantee dates, at which point the Raptors brought him back when they claimed him off of waivers. Pops didn’t survive long there either, though, and was waived before another contract guarantee date. After this, Pops went to European powerhouse CSKA Moscow (in Moscow) to replace Courtney Sims, who had spent only about eight minutes with the team. But Pops has played very little in his three months with CSKA. He is averaging only 11.6 minutes in Russian Superleague play, averaging 8.6 points, 4.4 rebounds and 2.2 fouls in that time. He has also totalled only 65 minutes, 37 points and 12 rebounds in EuroLeague play; 24, 19 and 8 of that came in just one game.

And here some highlights from that game.

Ron Mercer, a touchy subject to us Bulls fans, did not play after being the Nets’ amnesty clause waivee in August 2005. He was only 29 at the time, yet that was the end of his career. His main contribution to the news after that was being involved in an assault at a strip club in August 2007; after an argument with one of the girls, Mercer’s friend stabbed a bouncer that told them to leave, and Mercer then punched him. (Mercer pleaded guilty and received probation.) At the behest of Kentucky head coach John Calipari, Mercer has signed up to join a program at the university that helps former players complete their degrees, along with Derek Anderson.

Marquette graduate Scott Merritt played in all three of Ukraine, Cyprus and Turkey last year, so it was probably a relief to get one long gig this year. Playing for Tochigi Brex in Japan’s JBL. Merritt is averaging 12.9 points and 8.2 rebounds per game for the team; teammates of his include UCLA’s Alfred Aboya (7.7 points & 4.9 rebounds) and former Suns guard Yuta Tabuse (more on him later). Playing with Yuta Tabuse is a bit like playing with Dwyane Wade, at least in terms of hero worship.

Former Cincinnati forward Pete Mickeal had a few looks in the NBA at the start of the decade, including being drafted at the very end of the 2000 Draft by the Mavericks. But he never quite made it in. There were workouts, summer league gigs and a couple of training camp contracts, but Mickeal never made it into an NBA game.

Since those days, Mickeal has had a strong European career, the majority of which has been in the ACB. After a couple of years with Tau Ceramica, Mickeal moved to Barcelona this summer, and has been one of the best players on one of the world’s best teams (and probably the best non-NBA in existence). Mickeal is averaging 12.2 points and 5.1 rebounds in the EuroLeague, alongside 10.7 points and 4.0 rebounds in the ACB.

You might look at those stats and not be overwhelmed. But it’s all relative, to the standard of play at which they come, and to the depth of the team on which he plays. The Knicks have already been linked to Mickeal for next year; Pete may be 32, but the NBA is his if he wants it.