Lampe started the year in Israeli with Maccabi Tel-Aviv, but the version of Maccabi that he had signed with in the summer did not last very long. It didn’t take long before he was allowed to leave, at which point he moved to Russia to play for UNICS Kazan. In the Russian league he is averaging 14.7 points and 6.3 rebounds; in the VTB United league he is averaging 14.5 and 6.0 rebounds; in the EuroCup he averaged 16.9 points and 9.5 rebounds. The idea that Lampe was a combo 3/4 was never right in the first place, but it’s definitely not right now – he’s emerged as a good if inconsistent post player with occasional three-point range. He’s not Dirk, and he was never going to be Dirk. But he does have NBA talent, even if he didn’t exactly shine in the EuroLeague this year.

Lampley spent last year in Qatar, an extension of the Langhi tour that not even Dan himself has yet managed. He played for two teams there, and then auditioned at the KBL Pre-Draft camp back in July. However, he has not played professionally anywhere this season. Lampley was reported to be about to sign with his former Australian team Melbourne Tigers back in November, but never did.

Lampley recently lost his all-time Cal school scoring record to Jerome Randle. No shame in that, because Jerome Randle is pretty awesome. Won’t be drafted, but there aren’t many guys who can win any game single-handedly like he can.

Lang never lived up to his draft spot. Drafted in the second round seven years ago, Lang has spent his time since then in America, bouncing between the D-League and occasional NBA stints. He played briefly in Spain and very briefly in Israel, but has spent most of his time in the D-League, not really doing much developing.

However, his career took a tragic turn back in November, when he suffered a life-threatening stroke just after being released by the Utah Flash for health reasons. Lang was suffering from fatigue before the stroke, which is why he was waived; what no one knew at the time was that it was a precursor to this. All strokes are serious business, but Lang’s was particularly bad, leaving him partially paralysed (although hopefully only temporarily) and unable to speak. The internet carries no news of his condition after December. I hope he’s all right.

His final tweets just before the stroke are ominous precursors.

After Telekom were knocked out of the EuroCup, Turkish international shooting guard Serkan Erdogan left the team to go and play for Meridiano Alicante in Spain, Turk Telekom replaced him with Ricky Davis, who has averaged 13.6 points, 4.2 rebounds, 4.8 assists and 3.2 steals in five games. Had he played enough to qualify, those numbers would make him first in the league in steals, and tied for fourth in assists. Neither is something you would normally associate with Ricky Buckets.

Langdon is playing his fifth season with CSKA Moscow. He is averaging 14.3 points per game in the EuroLeague, 10.8 in the Russian league and the same again in the VTB United League. He has no other statistics of note, which is why I’m not noting them.

His backcourt team mate, J.R. Holden, is now into his eighth season with the team. This may be the longest-serving backcourt partnership of any halfway-decent backcourt in Europe; it definitely has to be the longest import pairing. Imports just don’t spend that long on one team normally.

The man with his own tour named after him has spent the year in Mexico and Puerto Rico, with a brief Korean moment in there. As if it could be any other way. After playing in nowhere but Asia and central America since early 2006, Langhi has stuck to his strengths and done the same again this year, spending the majority of the year with Halcones Rojos de Veracruz in Mexico. He averaged 13.0 points and 5.4 rebounds for the Mexican LNBP runners up, and now averages 10.8/8.8 for Indios de Mayaguez in Puerto Rico. He will probably do these two again next year.

Lasme was Lampe’s teammate at Maccabi Tel-Aviv, but unlike Lampe, he’s still there. He is averaging 6.5 points, 4.4 rebounds and 1.4 blocks per game in the EuroLeague, alongside 8.6/4.4/1.9 in the Israeli league. That 1.9 comes in only 19 minutes per game, and yet it’s good enough to rank second in the league. There’s not a whole lot of shot-blocking in Israel. (Former Duquense forward Shawn James leads the league with 2.8 bpg in only 25 mpg. He comes off the bench to do that.)

Bucknell graduate and one-time Spur Charles Lee is spending a second season in Germany, where, for whatever reason, he has forgotten how to score. Last year Lee averaged 13.2 ppg and 4.4 rpg for Bundesliga team Goettingen, but this year, played for the Artland Dragons of Quackenbrueck, those numbers have dropped to only 5.6 points and 3.1 rebounds per game. Lee is also averaging only 4.8 points and 4.6 rebounds in 24 minutes per game in the EuroCup. In 39 combined games Lee has only seven double-figure scoring outings, four of which have been followed by outings of two points or less. Lee has never been a great scorer, but he’s been an adequate scorer in both Belgium and Germany before this year. So it’s a strange drop-off.

Lenard last played in the 2005-06 season, when he appeared in 12 games for the Nuggets and 14 more for the Portland Trail Blazers. He has not been heard from since.

Rockets draft pick Leunen is playing in Italy with NGC Cantu. He is averaging 12.3 points and 5.5 rebounds in 32 minutes per game, shooting a Maarty Leunen-like 49% from three-point range. He’s also shooting 65% from two-point range, and should perhaps take more shots.

Due to his heritage – a heritage hinted at by his surname – Leunen is eligible for a Dutch passport. And having the passport of a country within the European Union is a great asset to any American basketball player, for it allows them to be counted as a European player, which gets them past the limitations on non-EU players that most leagues have (and therefore, they become more attractive to prospective teams). However, as far as I can tell, Leunen does not have a Dutch passport yet.

Fat Lever’s son, Anthony James Norwood Lever Pedroza Durazo, used to be a bench player for the University of Oregon, but has seen been a member of both the Spurs’ and Suns’ training camp rosters. Those were two of the only few times he has played outside of Mexico, which is the home town of his mother and where AJNLPD grew up. He was there this year as well, where he averaged 14.3 points per game on 48% three-point shooting for Soles de Mexicali. 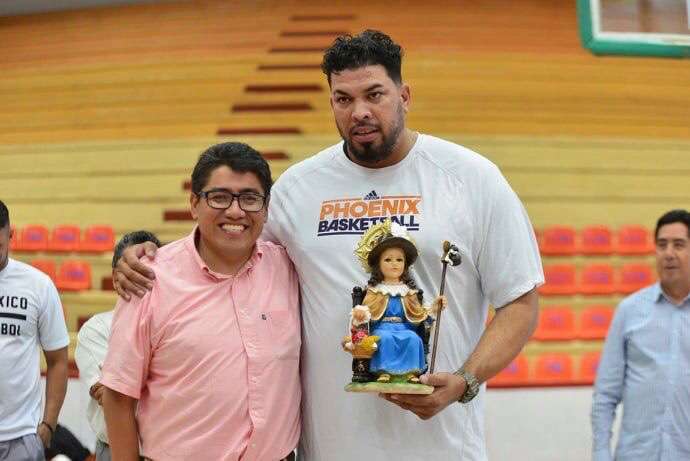