Anderson has not played since the 2005-06 season. His NBA career ended the year before, when he split the 2004/05 season between the Hawks and the Clippers, and after being waived by L.A. in March 2005, a ten-month wait ensued. Anderson then joined legendary Lithuanian team Zalgiris Kaunas for the rest of the season, the first and only non-NBA gig of his professional career. Chibbs averaged 2.4 points and 1.6 assists in the EuroLeague alongside 5.9 points and 2.8 assists in the Lithuanian league, and then that was the end of his playing career.

In between those last two playing gigs, he was declared bankrupt.

The last time we checked in on Anderson, he had been named the head coach of the CBA’s Atlanta Krunk. It was all supposed to be brilliant; for the 2007-08 season, the team hired Anderson as head coach, hired Kenny Smith’s brother Vincent as the general manager, signed Grayson Boucher (And-1’s “The Professor”) and minor league superhero Zach Marbury (Stephon’s brother) as a backcourt, announced Freedom Williams of C&C Music Factory fame as the majority owner, brought on Stephon’s clothing company to be the team’s uniform designers, and started shooting a reality TV show about the team. It was all supposed to be awesome. And then it wasn’t. In their only CBA season, the Krunk went 9-41, a loss total which included nine forfeits. Players were not being paid – at one point, the team was down to as few as five players as everyone kept bailing on them due to the lack of salaries. Their home arena was deemed unsuitable, so they had to play all their games down the stretch of the season on the road, and they also had no uniforms. To say it went a bit tits up sells it a bit short. I’m surprised they saw through the season.

The team was resold to new owners, moved to the PBL for the 2008-09 season, and changed its name and location to the Augusta Groove. They played one more average season, finishing 10-10, but had more financial troubles and folded. Anderson was there only for year one.

After it all went south, Anderson joined a clinic run by the NBA for retired players looking to begin coaching careers. At some point, he was also the coach of a SlamBall team. He is currently studying (not coaching) at St. Thomas’s University in Miami, and is hireable for both speaking engagements and running workouts.

Anderson is also a very active Twitterer. Follow him here.

Shandon Anderson was covered in the 1996 draft round-up thing that was written back in September. Or rather, he wasn’t covered at all, because there was nothing to say. In amongst all the talk about Travis Knight’s hair and penis, I wrote this:

The Knicks finally got rid of Shanderson in 2004, over three years after the pointless Ewing trade that brought him in in the first place. Shandon then spent two years with the Heat for no real reason, and managed to win a ring in that time through almost no work of his own. I can’t find anything that Shandon has done in the three years hence, but considering all the money he earned in the NBA, he has no real reason to get out of bed these days, so I wouldn’t be surprised or disheartened if he just didn’t bother.

We can do a little better than that now; in 2007, eleven years after leaving it unfinished, Anderson returned to the University of Georgia to complete his degree. He is now something of an entrepreneur; his foundation, the aptly-named Shandon Anderson Foundation, is designed to serve as a mentoring thing for kids, as well as giving out multiple scholarships to impoverished kids in the Georgia area. He also owns a salon and spa facility in Atlanta, as well as a vegetable restaurant and wine bar.

Most importantly, Shanderson is a proud wearer of skirts. And that’s a true story. If you don’t believe me, here’s a picture of Shandon Anderson in a skirt and a flat cap:

This. This is why you come here. God bless you Shandon for your complete lack of fear. I can respect that. And you’re right, skirts ARE comfy. They’re just a bit weird looking, is all.

Connecticut guard Rashad Anderson was the second-leading scorer in Italy’s Serie A last year, averaging 18.2 points per game for Udine. Serie A is the third-strongest league in the world, behind only the NBA and the ACB. Yet despite being one of the best scorers in one of the best leagues in the world, Anderson this season finds himself on the bench for a D-League team. Seems like a backwards step, really.

For the Iowa Energy, Anderson is averaging 10.5 points, 3.5 rebounds and 0.6 American assists in 20.3 minutes per game off the bench. The Energy are pretty stacked and have a 10-1 record, but if Anderson came back to the D-League for lesser money thinking it would be the next step to cracking the NBA, then he probably wasn’t expecting to be coming off the bench behind Cartier Martin and Pat Carroll.

Antonio Anderson is also in the D-League. After going undrafted out of Memphis this summer, he went to camp with the Bobcats, but he never really had a chance of making the team. He was then taken 12th in the D-League draft by the Rio Grande Valley Vipers, three places after Rashad was. For the Vipers, Anderson is averaging 41.9 minutes, 17.5 points, 6.9 assists, 4.4 rebounds, 1.3 steals and 0.7 blocks per game, shooting 46% from the floor and 30% from three-point range, all while starting at was is essentially the small forward position. (Decide for yourself whether it’s him or Garrett Temple that’s technically the shooting guard. Can’t say it matters much.)

The Vipers are the D-League affiliate of the Houston Rockets, and Rockets big man Joey Dorsey is on assignment there. He’s putting up numbers, too. In 29.4 minutes of 10 games, Dorsey is averaging 14.4 points, 13.6 rebounds, 2.1 assists, 1.3 steal and 1.4 blocks per game, shooting 64% from the field. It looks good, doesn’t it? But somehow, in only those 29 minutes per game, Dorsey is also averaging 4.0 fouls and an alarmingly high 4.0 turnovers. How do you turn it over four times a game in 30 minutes when you don’t touch the ball on offence very often? How many moving screens can one man set? Baffling times. Things to work on.

As I’ve said about 23 times in the past, Andriuskevicius is somewhat symptomatic of part of the flaw in NBA thinking. He is 7’3 tall and fairly agile for that size; it’s that combination that got him drafted and two years of guaranteed money. (It certainly wasn’t because of an extremely accomplished skillset or a history of solid production. Maty was raw.) But the flaw there is with the 7’3 measurement. It may well be accurate, but Marty is only as tall as he is due to an abnormally long neck. Were it not for that, he’d be only a normal seven-footer, if such a height can ever be considered normal. What advantage is he to gain from having a longer neck than his peers? Not a lot. Maybe he can see the play unfolding slightly better than his matchup can. But if he hasn’t the skills to do anything about it, where’s the advantage? Measurements can lie, and while they do matter, they can also be blinkered. They’re important, but not THAT important. Ask the Western Conference playoff team currently starting a 6’6 centre how much it’s holding them back.

Anyway, that’s just an ill-informed rant, not a circumstances update. As for how he’s doing these days, Andriuskevicius is into his third season with Alicante Lucentum in Spain. On the ACB season, he is averaging 8.6 points and 4.1 rebounds, numbers both down from last season. He also averages 2.6 fouls in only 17 minutes per game, in a league where you foul out when you reach five. But he does have 120 points on only 71 shots, which is pretty fantastic.

Araujo is back in his native Brazil, signed with Paulistano. Put a space in the right place, and that becomes a believable name for a hitman. Brazilian statistics are a bit difficult to find, and it doesn’t help that he seems to now exclusively be known as “Baby.” But as far as I can tell, he was averaging 13.5 rebounds and 8.7 rebounds per game. (If anyone can read Portuguese, feel free to construct a better translation.) At the very least, here’s a recent shot chart of his. He’s red number 55.

Araujo was never THAT bad. Below average, yes, and a bad draft pick at #8. But he has NBA talent, if only as a twelth man. This is about as much balance redressing as I can muster. He’s 29 years old now.

Robert Archibald and his hybrid accent are to be found in the same place that they’re always found – Spain. Playing for Unicaja Malaga, Arch is having a pretty empty year, averaging only 5.2 points, 2.9 rebounds and 3.2 fouls per game in the ACB, although improving to 8.2 points, 4.2 rebounds and 2.8 fouls per game in the EuroLeague. Nevertheless, his teammate there this year is fellow Brit and Aldershot’s finest, Joel Freeland; others you will have heard of include Omar Cook, Shammond Williams, Nedzad Sinanovic, Taquan Dean and Gorgeous Giorgos Printezis. And this is why the ACB is the best league outside of the NBA. Even the middle-of-the-road teams are stacked.

Archibong played in the EuroLeague last year when he was a member of Polish team, Prokom Sopot. He was pretty bad in it, though, averaging only 2.8 points, 3.5 rebounds and 3.1 fouls. This year, he’s moved to Germany and joined the Dusseldorf Giants. (I don’t have an umlaut thing on my keyboard, and I’ll be damned if I’m bothering to find one in charmap.) On the season, Archibong is averaging 14.1 points and 6.7 rebounds, leading the team in both categories.

In keeping with the unofficial German league rules, Dusseldorf have almost no German players in their rotation. In fact, they have only one; the backup point guard, Gordon Geib. But they do have a German coach, a man named Achim Kuzcmann. And he has one of the finest moustaches that you will ever see in the basketball world. 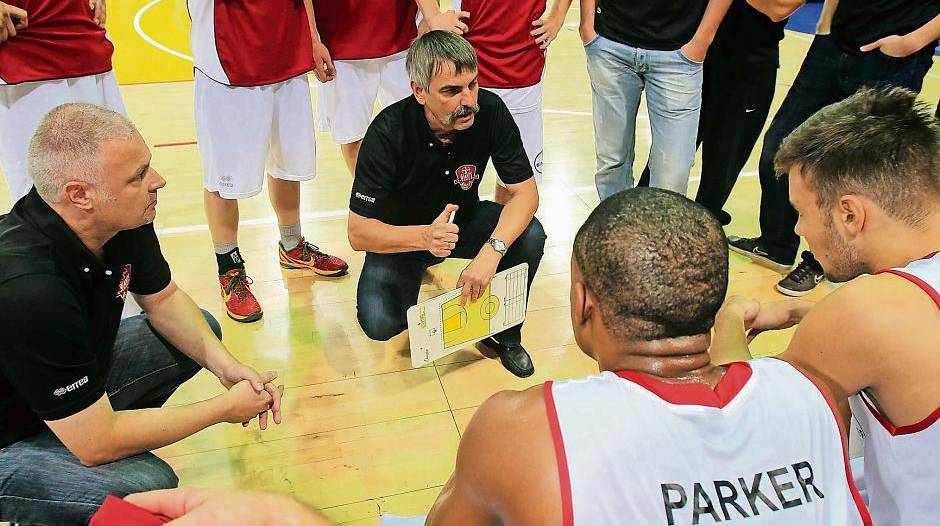 Armstrong last played in the 2007-08 season with the Nets, playing in 50 games as a back-up. He tried out for the Suns partway through last season, but did not make the team. He is now retired, if not officially, and is an assistant coach with the Mavericks.

He does not have an imperious moustache.