Nancy also have forward Louisville forward Ricardo Greer, who is one of the best …

This roster is heaving with talent, and will be particularly special if you’re a fan of the Connecticut Huskies. Remember, this list doesn’t include Rudy Gay.

– Jeff Adrien: If Adrien was 6’11, he would have been drafted. He’s a consistent double-double player, a strong rebounder, aggressive defender and solid post-up scorer, with good post-up defence, a hook shot, and more energy than a coked-up Jerome Williams. However, he can’t shoot or face up at all, …

The following post will make you hate the word Smith.

– Charles Smith is with everyone’s favourite delicatessen, Efes Pilsen, where he averages 14.7 points in the Turkish league and 12.0 points in the EuroLeague.

– Donta Smith is in Australia, which sort of has a Chinese league thing going on with its American imports, albeit thankfully not as exaggerated. For comparison’s sake, Donta started the year in China, so I can give you his Chinese league numbers … 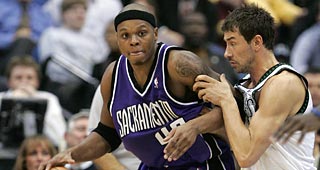