Signed in China - Signed with Guangdong

Pick 25: The internet wins another race as it is announced that the Celtics, picking 25th, will trade down to 27th with the New Jersey Nets, picking up a future second round pick along the way. The player they end up picking is Marshon Brooks, who boasts the draft's best (and only) mini afro.

Jay Bilas describes Brooks as having "tremendous scoring ability" and "one-on-one ability that not many players have." He also describes his defense as "matador." For one with such a supposedly rare ability to go so low in a draft so weak, the defense is going to have to be a whole lot worse than "matador."

Adam Silver also officially announces the Celtics/Nets trade, at which point it becomes apparent that Marshon Brooks actually spells his name MarShon. That mid-word capitalisation is completely unnecessary. But then, the owner of a website called ShamSports can't complain about that. 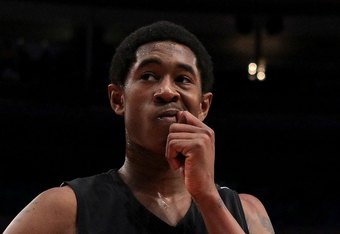 I want to see this afro grown out, Marshon. It has as much upside as you do.

Marshon Brooks - Brooks was the second highest scorer in the nation, although this was largely ignored until a 52 point outburst against Notre Dame (in a game that his Providence team still lost). That, the subsequent scrutiny, and the final workout cycle, has seem his stock continue to grow.

It is self-evident that Brooks is a highly talented scorer, although he is not flawless. Brooks's 24.6 points per game came on a very tidy 48.3% shooting, but the pace of play that the Friars played was a factor in that, and that pace also biases his 7.0 rebounds per game average. He's mainly a scorer from the mid-range area (mainly via pull-ups or turnaround jumpers) and the free throw line (due to his aggression), as even though he takes more than six three pointers per game, he is not especially good at them right now, hitting only 34% of them. Brooks can defend with the best of them when he wants to, as evidenced by his 1.5 steals and 1.2 blocks per game averages, but he doesn't always want to, only sometimes applying himself in that end. And the common theme amongst all this is discipline - Brooks takes bad shots, makes bad decisions, doesn't always play hard, complains, and gives sometimes intermittent defensive effort.

Nevertheless, an apologist could blame that on the wider struggles and ill-discipline of the rest of his team, and the apologist may well be right. You could say that Brooks was emblematic of the team's chucking, defensively-disinterested ways, or you could say he was held back by them and a coaching staff that didn't instill enough discipline. Whichever it is, Marshon has enough size and athleticism for the pro game, and he has the best statline of the class. And the flaws behind the production don't disguise quite how much of it there is - in addition to the rebounding, defense and scoring efficiency, Brooks is the second leading scorer in the nation. From the Big East, no less. He's a talent.

[Brooks also has the occasional desire to post up from 23 feet away. Shades of Rodney Green. Like it.]

View other Signed in China players