Not so long ago, the Celtics had five centres; Perkins, Shaquille O'Neal, Jermaine O'Neal, Rasheed Wallace and Semih Erden. They had more centres than they had roster spots for them, and had done it this way on purpose. But Rasheed followed through on his retirement plans, Shaq has struggled to stay healthy, and Jermaine lost that same struggle four years ago. Not even Erden exists any more; like Daniels, he and the Skillz Train were pawned off to the Cavaliers in exchange for a second round draft pick, simultaneously opening roster spots and saving money. Without him on the bench, the Celtics become even shallower. The team that has to go through Dwight Howard now has to do so while relying on Nenad Krstic and Big Baby at centre.

Skillz Train will make the roster and make some shots. It's just awkward that he begins (and maybe ends) his NBA career on the team already with the comparable Glen Davis. Harangody needs to develop an outside stroke, not to replace or negate what he already does, but to compliment it. I never want to see him lose the weird flip thing. It's too effective and too fun. 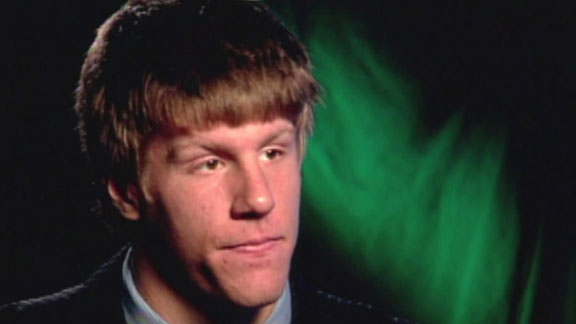 That man is certainly skilled, but he sure doesn't look like he should be.

The Skillz Train plays a lot like Glen Davis. This would be good for his NBA prospects, were he not on the team that already has Glen Davis. Gody never really posted up a great deal at Notre Dame; instead, he knew how to float to get open, and could make shots around the basket with those cackhanded hookshots of his, and hit some outside shots with that cackhanded jumper. He is no slasher and as of right now is no three point shooter; then again, neither was Matt Bonner back in the day. If Skillz Train takes that career arc instead, it might not be a bad thing.

Who's he going to defend in the NBA? Simple. No one. He'll just have to score enough for that not to matter. And if he can't, then he just won't stick.