Anyone can of course declare for the NBA Draft whenever they like. Particularly those playing in college who are giving away their marketable skill for free due to the stupid archaic nature of NCAA basketball that ascribes all kinds of mythical qualities and puts all kinds of importance on why the athletes should not be paid other than by scholarship, all of which is a conceit to obfuscate the fact that it is a bloody convenient historical relic and nothing more. Dixson, however, may have been one of the few who would have benefited from staying that one extra year.

Dixson declared last season as a redshirt sophomore, and, at the age of 22 when he did so, fair enough. That said, his averages in that sophomore season had all regressed from his freshman year, seemingly still hobbled by the knee injury that ended his second season after only 10 games. He thus entered the draft without momentum or the cleanest CV; he had helped his UIC team to a runners-up finish in the CIT that season, yet with him back in the fray, maybe they could have made the platform that was the NCAA Tournament. Nevertheless, Dixson went pro, and after going undrafted, he joined the Miami Heat for summer league. Unable to get an NBA contract after that and despite further workouts, he initially went to the Lebanon for a stretch, then joined the G-League, initially with Windy City then latterly traded here to Capital City.

The Intrigue surrounding Dixson comes from his athleticism. He is a big time run-and-jump athlete in a wiry 6’7 frame that has high-level potential. Potential both offensively, where he runs the court freely, and defensively, where he can potentially cover multiple spots. There is however an awful lot of work for him to do to realise this potential. Dixson is often out of place on defence, forces far too many shots offensively, is not a good shooter either off the catch or off the dribble, and also struggles to finish at the rim if it is not a dunk. He is not a consistent creator with the ball in his hands, nor is he able to get space or to get to his spots consistently, and much as he likes to run the court, he is not efficient in doing so. Dixson is thus a project still in need of much work who does not have the time to hand to miss another key development season. 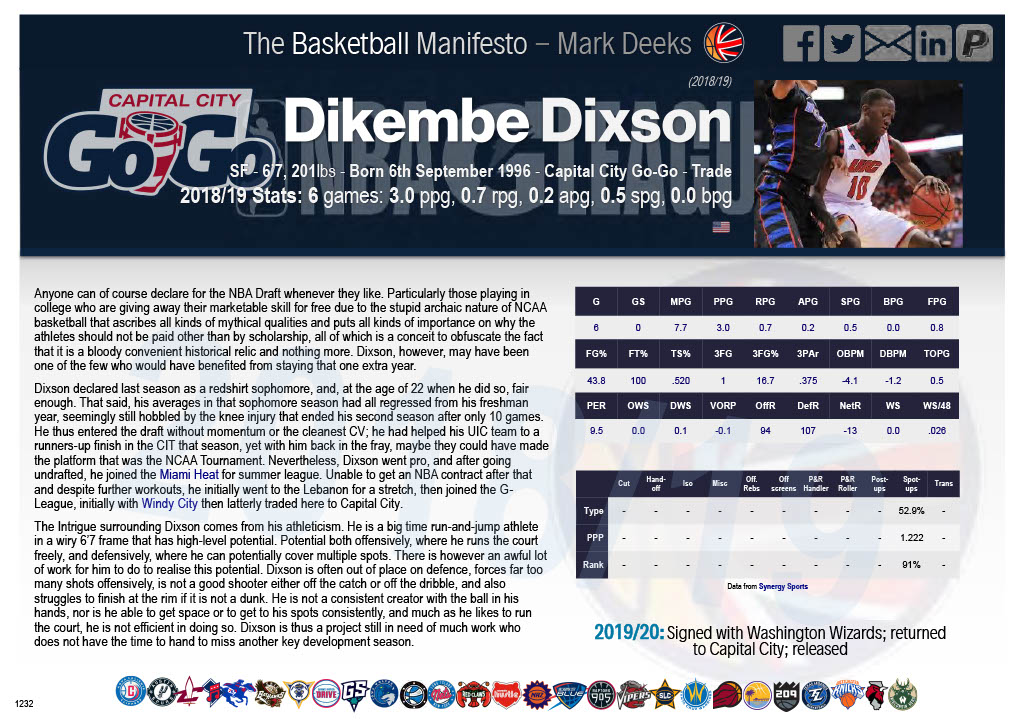