Previous to the previously. 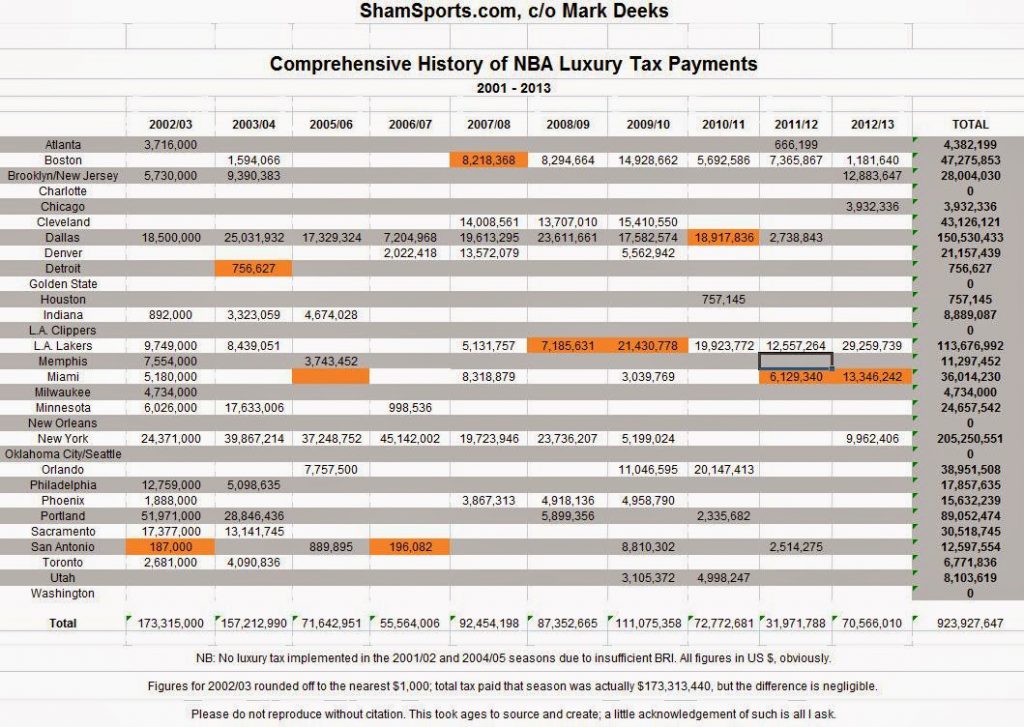 The same thing again if you take the Knicks out of it altogether
February 27th, 2014

A short sharp examination of how paying luxury tax does not necessarily correlate with winning
February 27th, 2014

An important and unique feature of this website is the annual monitoring of every luxury tax dollar paid in NBA history. Using that data, here’s a short sharp hot sports take.

There follows a post that was in the process of being edited ready for posting on SBNation.com which talked about the Spencer Hawes to Cleveland deal and how it did – or rather, didn’t – affect the Sixers’s proximity to the salary cap floor. However, Adrian Wojnarowski’s latest tweet, which states that Danny Granger is to be traded to the Sixers, makes it irrelevant now. It is hereby posted here anyway on account of the fact that, one day, it …

In keeping with what is becoming an annual tradition, there follows a very, very lengthy look at all the retired players this site has, for whatever reason, kept tabs on before. (Some of them are a bit niche. But when you’re in, you’re in for life.) This list is mostly of recent NBA players and an update of the 2013 edition of the same list. The cut-offs are somewhat arbitrary, but they have to be somewhere.

How do you solve a problem like Taj Gibson? A follow-up.
February 9th, 2014

Despite it running in the initial instance with a rather significant error in it – I spent a lot of time breaking down how the Bulls had arrived at, and would extricate themselves from, a luxury tax position that they weren’t actually at – the previous post entitled How Do You Solve A Problem Like Taj Gibson? received a remarkably hearty welcome. So, thank you for that.

However, as is always the way with pieces that deal with salary minutiae …

How do you solve a problem like Taj Gibson?
February 7th, 2014

Taj Gibson is bloody excellent. Long noted for his technically precise interior defence, he has managed the rare feat of developing his offensive game to the point that he is a versatile and viable offensive weapon (he now hits the mid-range jumpers he has always taken, and damn near dream-shook Greg Stiemsma the other day) without losing any of his defensive intensity or effectiveness …