Bulls might waive Nate Robinson to save money (and possibly for another reason, one for which I have no evidence)
December 19th, 2012

K.C. Johnson reports that the Bulls, despite being a number four seed without having their MVP on the court, are sorely tempted to waive Nate Robinson.

In one of the most unheralded high quality moves of the summer – unheralded because the dominant Bullsean narrative of the summer was rightly one of cost-cutting and player-dumping – the Bulls were able to sign Robinson to not only a minimum salary contract, but a partially guaranteed one at that. Of the …

Even though he signed a one year minimum salary contract using the Minimum Salary Exception, Nazr Mohammed has a 15% trade kicker in his current contract.

Trade kickers in contracts are somewhat rare. They are particularly rare in small contracts, as becomes obvious upon a study of the current trade kickers in the league today:

Addendum to Teague story: the Bulls's salary cap picture, and how it came to be
August 2nd, 2012

After all the roster turnover, the Bulls breakdown of 2012/13 salaries currently looks like this:

Marquis Teague is still unsigned, and you're probably not going to like why
August 1st, 2012

Of the 30 first rounders drafted in June, 29 have signed their rookie scale contracts. There are to be no international draft-and-stashes in the first round this year; 29 are signed and ready to play in the NBA next year, while the other one should be.

The 30th player, the lone unsigned warrior, is Marquis Teague. He was drafted 29th overall, and while the 28 ahead of him (and Festus Ezeli behind him) have all been signed, Teague still …

Omer Asik is now officially a Rocket, his offer sheet (identical to that of Jeremy Lin’s) going unmatched by Chicago. This gives Houston an absolute defensive wall at the centre position, someone who last year was one of the best defensive big men in the league. On a par with Dwight Howard and Tyson Chandler, albeit in considerably less time. We’ll see how well this holds up when he becomes a 25mpg+ player outside of the comfort of …

I have compiled a spreadsheet containing to-the-dollar information on all luxury tax paid to date. In the 11 seasons since the luxury tax was created, it has been applicable in nine seasons; in those nine seasons, 23 NBA franchises have paid over $850 million in payroll excess. The exact details can be found here.


Please use the spreadsheet freely for resource purposes, and feel equally free to suggest any improvements. However, please do …

Before the sign-and-trade of Ryan Anderson to New Orleans, Orlando had one TPE, totalling $4.25 million, created in the Glen Davis/Brandon Bass trade of last offseason. That $4.25 million TPE is set to expire on December 12th.

Orlando used some of that TPE in the Anderson deal to absorb the returning salary of the criminally overlooked Gustavo Ayon, who is to earn $1.5 million this season. The Bass TPE, then, is now $2.75 million big, and thus …

Whatever you may feel about Jeremy Pargo – personally, I’m quite shocked at how poor his rookie season was and firmly believe he could do considerably better given a faster paced team with better spacing – it is only important to know that in today’s trade featuring him, he was merely a salary. So too was D.J. Kennedy. In trading Pargo, his $1 million guaranteed 2012/13 salary and a second-round pick for Kennedy (whose minimum salary of $762,195 is …

Here is the official list of tax paying teams, and their amounts paid, in the 2011/12 NBA season.

By opting to keep Jerry Stackhouse for the full year, then, Atlanta paid the price.

It is of note that that is the smallest amount of league-wide tax paid in any season since its inception, and by quite a long …

This post is essentially an addendum to this previous post. That post talked about an NBA contract that had accidentally been created and ratified in violation of a Collective Bargaining Agreement. Specifically, it talked about Zach Randolph and the Memphis Grizzlies.

In April 2011, Zach Randolph received a four year, $66 million extension that will pay him through the 2015 season. Notwithstanding the very valid arguments that a man who doesn’t have any athleticism in the first place is going to decline slower than most, and that Memphis have to pay particularly big dollars in order to retain quality their quality players, it is unmistakably a big contract. 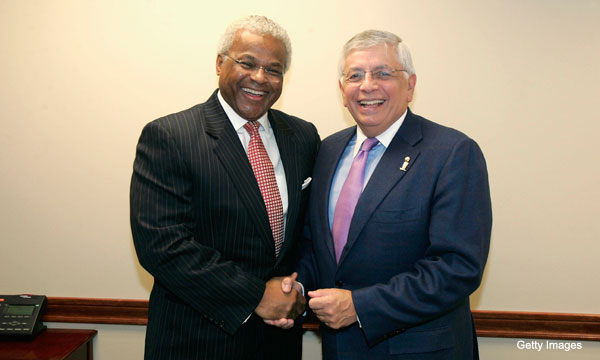 What does amateur football do right that professional basketball can’t?
February 24th, 2012

On New Year’s Day, I stood in a field and got rained on for two hours, in what must have been most rainswept match in the history of football that was somehow never called off for a rain. In a pitch so waterlogged that sliding tackles went on for upwards of 15 metres, Tonbridge Angels drew 1-1 with Bromley FC in a tight, competitive and bloody soaking Blue Square Bet South proverbial six pointer, amidst a day-long rain storm that …

“Creative financing.” A fun term, one that’s actually employed by financiers and accountants, yet one brought into the world of the NBA when it was used, once, in a pre-emptive justification for one of the least creatively financed transactions of a generation. Nevertheless, even if the man who gave reverence to the phrase isn’t the role model for its usage, creative financing does …