On Saturday afternoon, I went to a non-league football match. Football is a sport that we have in this country, which involves people kicking a ball with their foot (hence the name). It’s a tremendous sport of flair, innovation and foul language, which unites the whole entire world in its single-minded appreciation of how wonderful the beautiful game is.

(There is an American variant out there called “soccer”, but it is marred by terrible broadcasting, stupid gimmicks, and a bad standard of play. It is not recommended.)

The game was between Tonbridge Angels and Oxford United, an F.A. Trophy first round match. Oxford United were at home, which meant for us Angels fans a day trip out to a 12,000 seater stadium. For those unaware, Oxford United were good, back in the day. Then they went bankrupt. A man named Kassam saved them, bailed out the finances, and built them a new stadium. But it hasn’t done the team much good, and they have since fallen out of the Football League (and also fallen out with Kassam, although they are stuck with the stadium named after him). They’re also now flat broke again.

Despite the team not befitting the stadium that houses them, the importance of the event and size of the stadium made it a highly entertaining day out for us visitors. The official attendance for the game was 1547, and if you don’t know what having 1547 people in a stadium that seats 12,000 looks like, then either watch the Florida Marlins at home, or look at the picture below: 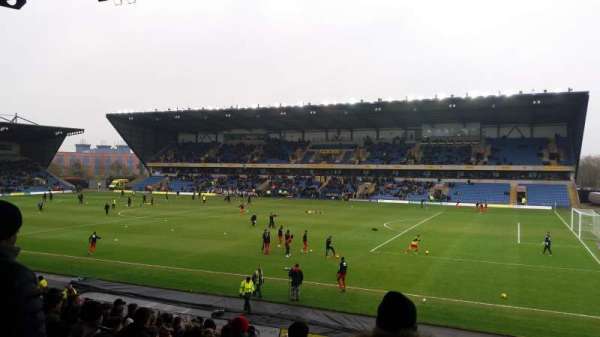 Of the 1547 people to attend, about 220 were Tonbridge Angels fans who had travelled a hell of a long way to support their team. These 220 people gave great voice, and showed the world (or at least, the rest of the world that was there) quite what being a sports fan is about.

Chants were everywhere. The songs were not particularly intelligent, and a lot of them were not politically correct. But dammit, was it fun. Songs included “Tommy Warrilow’s Blue And Red Army”, “Your Support Is Fucking Shit”, “Did you sleep in until half time?”, “CRAAAAAAAACK!!!” (toward the Oxford goalkeeper Billy Turley, who once failed a drugs test), “Who needs Mourinho, we’ve got Tom Warri-low”, “Someone nicked your other stand” (in reference to the way that Oxford’s stadium has, bizarrely, only three sides), and the mighty “who are we? TONBRIDGE!” chant that aired regularly.

That selection is merely tip-of-the-iceberg type stuff. Songs were being invented on the fly, with about 50 invented in all. The Oxford supporters in the other two stands eventually chimed in, and a call-and-response got going, with the Tonbridge faithful ridiculing the dismal turnout of the Oxford fans which such seminal smashes as “We Forgot You Were Here” and the aforementioned slightly rude one about their support, while Oxford fans responded in kind with jibes at Tonbridge’s amateur status.

It was all good-natured fun, brought to you by people who actually care about the teams on show. They care so much that they willingly travelled for hours to get to the place, just to stand around outside in the frankly arctic weather, in a largely desolate stadium in the city’s ugly industrial suburbs, drinking Bovril out of a paper cup, and shouting for sustenance. The health and safety man may keep ordering you to sit down, but you don’t, because you’re enthused and genuinely interested in the action. He eventually relents. The old man alongside you with mild Tourette’s screams enthusiastically at any mildly interesting piece of action (usually random shouts of “Hey! Ho!”), and the ambitiously dressed middle-aged woman to his right hisses the word “shit!” in a really sinister way every time your team loses possession. At stoppages in play, you chant out your players names, daring them to signal acknowledgement of your chant. And when they do, you woop with joy. You cheer, wail, antagonise, ridicule, toot air horns, throw your apparel with pride, and just generally make your own entertainment, while always fixated on the action.

You don’t get any of that in the NBA.

You get signs telling you when to make noise, and ‘entertainment’ ushered onto and off the court with military precision every time play stops for more than 10 seconds.

You get an experience, but you don’t get to enjoy yourself. You do what you’re told, and you’re told to do everything.

There’s a reason that Golden State Warriors fans managed to put on such a spectacular showing during their first round playoff matchup against Dallas last year – it’s because they cared. And they didn’t care who knew it.

Forget the family experience that the NBA looks for when selling tickets. Let’s start stocking these arenas with people who will actually want to be there, and who will follow the action without prompting. Instead of banks of seats filled with people sitting down eating, let’s have people up and cheering, singing, bringing atmosphere into a place that’s supposed to ooze it from every turnstile. Let’s not have 46 minutes of gentle appreciation and two minutes of giving a toss.

If you don’t think this is possible in a game of basketball, watch the EuroLeague some time.