Eurelijus Zukauskas - Zukauskas owns a construction and real estate company in his home town, and still plays the amateur game. 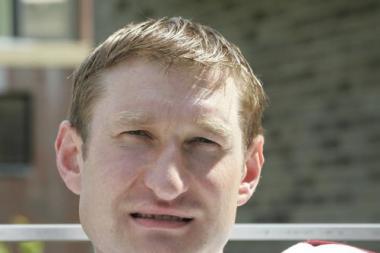 - E-Zooks, the man with the smallest eyes in the world, is also retired. He gave up the game in 2009 after returning for two final years at Zalgiris, and now plays a lot of tennis. But not before briefly considering a return to basketball. It didn't happen.

Chances of making the NBA expressed as an arbitrary percentage: 0%

Zukauskas was a draft pick of the Sonics back in 1995, and Seattle immediately traded his draft rights to Milwaukee along with a future second rounder for those of Eric Snow. Milwaukee lost that trade; E-Zooks never joined the NBA, and while he churned out a good career in Europe doing a decent impression of an entry level Arvydas Sabonis, Zukauskas retired at the end of last season. He is now a stay-at-home dad with coaching aspirations.

According to Google Translate, "Zukauskas" means "Sharkey", which is pretty awesome. It also warrants a mention that in his picture above, Zukauskas bears more than a passing resemblance to slightly-Japanese ex-NBA big man, Robert Swift.

It might be a coincidence that two former 7'1 ginger Sonics draft picks happen to look about 85% identical. But is it? Is it really? No.