Rodney Rogers - Since his paralysis, Rogers sightings are (inevitably) few and far between. That said, he showed up at Wake Forest last week, armed with a big smile.

Rodney Rogers was paralysed from the neck in an ATV accident 16 months ago. His only public appearance since that time was in September, when he was honoured at a Wake Forest football game. There are pictures of that day on the internet, but find them yourselves. I don't like to look at them.

- Rogers last played in the NBA in the 2004-05 season. He was traded along with Mashburn from the Hornets to the Sixers, and averaged 6.0 points and 3.7 rebounds with the Sixers in his final 28 games. He never played professional basketball again.

Upon retirement, Rogers started working as a heavy machinery operator in Durham, purely because he liked doing it, and got promoted to supervisor within short order. He was also doing some voluntary coaching for a girl's team, and has established a computer laboratory in a public housing complex. There's something endearingly pure about that, particularly the line from his agent Butch Williams that says "he loves big trucks." It seems almost childlike in its innocence, and that's jarringly beautiful in an industry as seedy and corrupt as the NBA can often be.

Yet that affability just makes it all the more depressing that this happened: 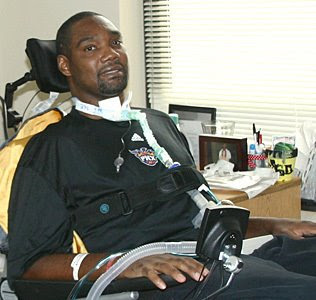