Corie Blount - Blount now runs Gradu8 Inc. Uncertain as to what that was, the following is quoted from the company's About page:

Gradu8 Incorporated- ?the first organization solely committed to representing the pride of academic achievement through the manufacturing and distribution of customized products.

The company is named for its' efforts to promote graduate awareness, stress the importance of graduating and increase graduation rates here in America. Gradu8 understands the commitment and sacrifice every student faces to attain academic success. Our goal is to acknowledge those who have achieved success educationally and inspire those who have not.

Gradu8's unique programs are currently showing up in schools and businesses across America. Administrators and teachers commend us for creating fresh concepts that promote the value of graduating to their students. No other company has the ability to promote the? pride of education and graduation the way that Gradu8 does.

Corie Blount - Blount was released from prison last May. He now co-owns an AAU team.

Corie Blount is out of prison. Tommy Smith isn't.

In December 2008, ex-NBA big man Corie Blount was arrested for possessing all of this: 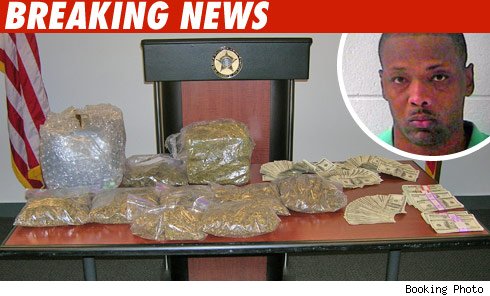 Corie insisted it was for personal use; specifically, for his 40th birthday party the following month. He insisted that he was not a dealer, that he was not destitute and in need of an income; instead, he tried to convince the prosecutors and the world at large that he merely listened to the bad judgement of friends, and got caught out.

Problem was, that's still a hell of a lot of weed. 29 pounds to be exact. And so while trafficking charges were dropped in a plea agreement that saw Corie plead guilty to two counts of possession, the judge was still not convinced. He sentenced Corie to a year in prison, five years probation, 250 hours community service, and ordered him to forfeit some cash and some cars. Corie had taken the plea agreement in the hope of avoiding prison, but it didn't work out that way. And it didn't help that the sentencing judge decided to have his own personal Youtube moment.

Corie was sentenced to a year in jail on May 13th 2009. And despite multiple requests for early release (citing Corie's attendance of NA classes in prison, his concurrent completion of a CBT course, his submission to regular drug screening, his his conviction-free record before this, and the non-violent nature of his crimes as reasons why), those motions were all denied. Blount ended up serving his full sentence, and was released as planned last month. Now that he's out, Corie is repentant and still insistent that he's not a dealer, but also worried about a future that he can't see.

It's hard to know for sure, but Corie Blount seems to have a Twitter account. On it are no Tweets, but there IS a picture of a man that looks decidedly like Corie Blount wearing a sombrero. Happy about that. But is it the best potentially-real NBA player Twitter account out there? No; that honour belongs to James Posey, whose only two tweets are pretty divine.