As the NBA moves away from Valanciunas-style players, and as the frustrating aspects of his game (namely, his inability to see anything other than the basket when posting up and being too slow to react) perpetuate, Valanciunas is in a bind. He has developed nicely as a post-up player and interior lump who rebounds well on both ends, and who, as his playoff showdown with Channing Frye showed, can get back on the interior what he gives up on the perimeter. Yet Toronto need to speed up and get less expensive, thus Valanciunas is in the wrong place. The NBA still requires quality post players, and Valanciunas is that. But his role in the future is to be more like that of a Robin Lopez-type than a piece of the future type, and it is unclear where that future will even be.

Player Plan: Three years and circa. $49.6 million remaining, with the final year as a player option. It’s not a bad price for a talented player. It is however a fairly hefty price for an increasingly obsolete player who may need a change of scenery. Likely to be moved, and could represent good value to whoever receives him, as long as they can cater for his flaws.

DeMar DeRozan thrives in the arcane, but can he make his team better from there?

[...] DeMarre Carroll and Jonas Valanciunas are not drawing much defensive respect outside of the paint, while Patrick Patterson is not making enough shots this season to capitalise. Although somewhat effective, backup point guard Cory Joseph is not the scoring counterpart of DeRozan in the same way Lowry is, while Delon Wright and Fred VanVleet are not NBA calibre primary playmakers at this time. And while Serge Ibaka has become one of the better stretch bigs in the game, he is not creating looks with or without the ball so much as just taking what crops up. DeRozan is at his best as the first or second scoring option in a two-option line-up, but without Lowry, Toronto has thus far only had one.[...]

Cleveland picks again next, and the panel, in unison agreeing that they should pick a big, discusses the validity of Jonas Valanciunas's candidacy. Jeff Van Gundy fails so hard on a pronounciation of his name that he ridicules himself, to save Stu Scott from leaving it hanging awkwardly. Nevertheless, Stu finds a way to make it awkward, leaving four seconds of dead air after an unfunny comment from Barry. I'd like to think he was doing this to show up Barry - the truth, however, seems to be that Scott cannot listen to his earpiece and talk out loud at the same time. Must Improve: Organ Synergy.

Bilas raises the debate as to how big of an issue it is that Valanciunas may not join the NBA for a year or two. This, however, is an easy answer. Valanciunas is the second best big in this draft, behind only the Turkish security guard. You certainly wait a year for him. You'd wait two. Three. Five, if he truly pans out. You wait as long as it takes for the appropriate talent. This is reinforced by how much Jonas has improved in the last two years. Two more years like that, and he'll be even better when he does come over. Executives often make short term decisions for the simple reasons that they are on short term contracts themselves, and need to win games in a results-driven industry. But Cleveland can afford to wait it out, and thus they should.

Pick 5: Toronto pick at #5, which is unfortunate. The team mocked for its president's excessive affection for European players (as well as Americans with European experience) is now looking at a draft board where the best remaining player is European. Worse still, he's a European who won't give any short term assistance to a executive who only just managed to save his job in time for this draft. In the eyes of many, they will now be damned if they do and damned if they don't. Not picking Valanciunas is a mistake, while picking him is the continuation of a cycle of flawed decision making that has held back the franchise for years.

Nevertheless, the Raptors pick Valanciunas anyway. And they were right to do so. Even if Valanciunas cannot join the NBA immediately, it is not because he doesn't want to. He is not pulling the Vazquez. These circumstances will untangle themselves eventually. Valanciunas also fits a need for the Raptors - he does not have the athleticism and defensive dominance that the long-coveted Tyson Chandler does, but you can draw a line with the two both on it. It's not a perfect comparison, but there is one. It's the right pick. A Chandler-type who doesn't panic when it's time to take a layup is a very good type indeed.

When asked by Mark Jones whether Dirk Nowitzki's success has been an influence on he and other international players, Valanciunas responds with "ummmm, he shows, like, uh, international players, can, can, did...did great job in this league, so...I hope, I hope I can, can make it." When Jones asks Valanciunas how he compares to the departed Chris Bosh, Valanciunas retorts "I don't know. I'm...I have....erm...not, not not not so strong body, so....I don't know. I..I-I-I-I-I-I-I can make faster, so, I think like this." Jones then humiliates Jonas for his bad English. I'd rather have broken disjointed forthrightness than eloquent bloviating cliches, but that's just me. 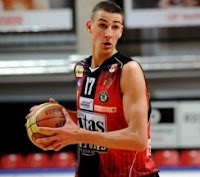 Any time you watch a game with Jonas Valanciunas in, randomly pause
the live action, and I guarantee he will be making this face.

Right now, he compares somewhat to Joel Przybilla if Joel Przybilla had any offensive finesse. Valanciunas runs the pick and roll to a Lithuanian standard, is smooth, polished, controlled, never rushed, and highly poised, with good touch around the basket and a very nice free throw stroke. He does not shoot jumpers yet, but he's such a quick learner and such a good foul shooter (89% in the Euroleague, 125-158 and 79% across all competitions) that it won't take long. He is an extremely good rebounder through size, smarts and effort, and he blocks shots with his great wingspan and aforementioned effort level.

More than likely, he will not stay Przybillay for long. This is in no small part because of his much higher offensive skillset. The free throw percentages already mentioned are a testament to that.

Nonetheless, there are still flaws. Valaciunas is finesse more than power, doesn't have a go-to move other than the pick-and-roll, and still has to beef up some. He was also consciously and constantly attacked by opposing Euroleague offenses, for he was the young and experienced one. And it is true that he struggled with that at times, giving up fouls on his pick-and-roll defense, and not always being in position. But it is also true that he improved noticeably during the season. Such is the common trend amongst Valanciunas's story - if there's something he can't do, he learns it incredibly quickly. I don't see what part of this fails to translate to the NBA. And thus I see a good quality NBA player in our midst.

It doesn't matter if you have to wait an extra year. It's worth it.