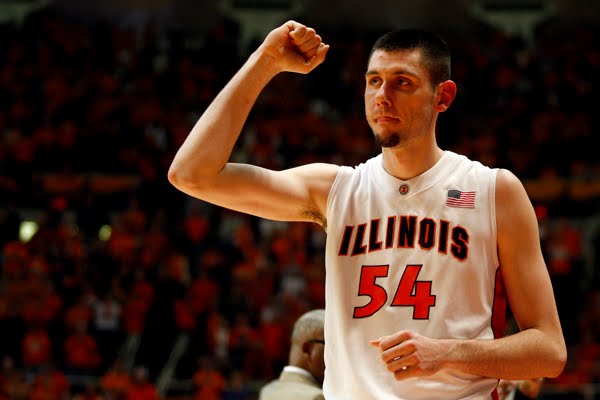 "Two tickets to the gun show."

Mike Tisdale - Tisdale has always been incredibly, infamously thin, and all the weight training programs and forcefeeding he was subjected to have not really changed this. Were it not for the lack of girth, Tisdale would have a great body type for a center - 7'1, with very long arms, and pretty good mobility (running the floor well for a big man). However, even now that he's slightly bigger, Tizzy is not tough. You can be slender and tough, as Valanciunas demonstrated above. But Tisdale isn't. He can't handle the physical play. He shoots jumpshots or fadeaway mid-range hooks, and doesn't keep position on the interior. And at no point in the process does he look like Dirk Nowitzki. Not even Earl Barron.

The senior front court of Mike Davis and Mike Tisdale has also rather underwhelmed. Davis, whose calling card for three years was his great rebounding rates and automatic double-doubleness, has decided not to do any of that this season, and is averaging less rebounds now than he did as a sophomore. He has decided to not shoot every time he touches it now, which has helped his efficiency and his passing numbers, but Davis remains a thin, perimeter-based face-up power forward who rarely drives, doesn't create in the post, almost never gets to the foul line, can't defend anybody, and who takes long two point jumpers and 18 foot hook shots, the most inefficient shots in basketball. Tisdale has had similar problems - he has continued to work on bulking up, and has become normally thin (as opposed to worryingly emaciated, like he used to be), but it hasn't really changed anything. He is still abused in the interior on both ends, and would rather use his 7'1 height to camp out shooting jumpshots. At least he brought some three point range this season.