Acquired by the Nets along with picks in the deal that the Lin-acquiring Hawks should have done, Faried is an always-productive NBA player who has unfortunately lapsed into passed-around territory on account of both the size of his contract and the stagnation of his game. The Manimal was a valuable power forward back when power forwards who could not shoot jump shots were worth having, but while the game has developed around him, he has never developed his game, and a potential pairing with Nikola Jokic gave up far too many points defensively to ever work.

Kenneth Faried, it seems, has outstayed his welcome in Denver.

It is in a way odd, for he has played no noticeably worse. Faried still does the same thing he has always done, running the court, dunking, making highlight plays, not spacing the floor, and massively over-prioritising rebounds at the expense of defensive positioning. You would think that a man who is at least effective at what he does, who hustles about, makes a positive if marginal impact on the court and makes the whole thing fun would have some kind of role going forward.

Seems not, though. He only plays the power forward position, really (small ball five line-ups with him at centre would have big defensive problems), and the Nuggets now have all of Paul Millsap, Trey Lyles, Tyler Lydon and Darrell Arthur to play the position as well. Considering that Wilson Chandler is also better at that spot in his advanced years, that Juancho Hernangomez can also do it, and that Mike Malone really likes Mason Plumlee at the spot in a two-post unit with Jokic for some reason, and it is easy to see how falling down that pecking order can be terminal at this point.

Faried, for all the fun and good plays, never really improved. The Nuggets now want to, and don’t think he will help them do that. Somehow or other, this will surely be resolved this summer.

Player Plan: One year and $13,764,045 remaining. Since he is clearly not wanted as a player any longer, that salary is not wanted either, and needs to be moved.

There was the usual Manimal stuff, or at least there was once he was allowed to pair with Jokic (with whom he formed a strong offensive understanding), rather than sharing a clogged lane with Jusuf Nurkic. His minutes were down, and may continue to be down going forward given the breakout of Jokic, the impending breakout of Hernangomez and the acquisition of Plumlee. But per minute, Faried still did what he always does; throwing himself at the rim, expending energy, going to the glass, and having an impact defensively through playing hard. His usefulness going forward may mostly lie in trade. But in proving himself to be a willing and capable role player with a fairly unique approach to the game, he has proven his trade value.

Player Plan: Two years with a combined circa. $26.7 million remaining. That is both a very tradeable contract and a player very much worth having, and not just on this team.

Faried is in the building, holding a small baby, presumably his own. For all his innate, endless hustle on the court, he does not exactly hustle to the stage, but this gives time for Mark Jones - who might have thought his night was over - to resume his thoroughly awkward position off to the side of the stage. In his post-pick interview, Faried talks about the size of the party he is going to throw tonight. If you don't like Kenneth Faried, I don't understand you.

Kenneth Faried - My Kenneth Faried love goes a long way. Faried was the NCAA's best rebounder last season, by a long way, by any metric, and the fact that he played in a mid=major conference doesn't change that. He did it against the good teams, too; 18 against Florida, 12 against Ohio State, 17 against Louisville, 13 against Richmond. And even if the offense is not refined, the athleticism and hustle is sufficient to make an impact. Same on the defense.

The fact that he's only about 6'7 doesn't change anything. Measurements needn't matter as much as they do. He's not going to forget how to rebound, how to read the ball off the rim, how to get positioning, how to box out without fouling, how to tip the ball, how to work hard and hustle for everything. It'll make it harder, yet it's something he's simply too good at to not continue to be good at. Kenneth Faried is going to be a good contributor in the NBA and I will punch anyone who disagrees. 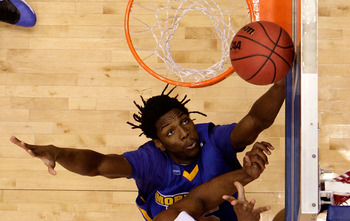 Morehead State consist of Kenneth Faried, and then a bunch of other players. Faried is the best rebounder in the nationa, and it is not even especially close. He ranks first in the nation in defensive rebounding percentage, ranks first in offensive rebounding percentage, and just broke Tim Duncan's all-time Division 1 rebounding record. Duncan grabbed 1,570 in his NCAA career; Faried has 1,648 and counting. He scores, too, improving both his jumpshot and his interior finishing, putting up 17.6 points per game and shooting 64.4% from the floor. And then there's the 4.4 stocks per contest.

The other guys are headed up by Demonte Harper, not a bad rebounder himself, a small scoring guard and pseudo point guard with a worryingly huge turnover rate. But despite Harper's 16 points per game, it is, nonetheless, still all about Faried. For all of Kenneth's Rodman-like contributions, Morehead State lack a point guard, can't shoot a foul shot, have no real size (Faried has a small forward's body), don't defend the three, turn it over too much and can't hit a foul shot. This season, then, will be much like the last time they made the tournament in 2009 - a quick first round exit, highlighted by Faried's awesomeness.

Cousins is the right pick for Sacramento, for they needed a big man. There were of course a multitude of other big man options in this size-laden draft, but Cousins represents the best chance of stardom. He is better than Favors right now. He has NBA size, great strength, athleticism as well, soft hands, a deft touch, footwork, and the ability to score in the post going either left or right. Moreover, he is a prolific rebounder, who grabbed as-near-as-is 10 rebounds per game list year in only 23 minutes. That's an unbelievably good rebounding rate, particularly in view of the 35 second shot clock that sees less possessions per game. Cousins ranked 28th in the nation in defensive rebounding percentage last season, and ranked second offensively: the only player with significant minutes in the NBA last season to come close to Cousins's 19.1% ORB% is the man he may replace in Sacramento, Jon Brockman (18.2%). DeJuan Blair (16.0%) is comparatively a mile behind.

(If you didn't click that first link about defensive rebounding percentage, click it this time, and see first hand quite how unbelievable Kenneth Faried's numbers are. He only plays in the Ohio Valley Conference, but look for him in next year's draft, and expect to see that number again. 36.2% of defensive rebounds? The entire Warriors team barely gets that many.)