Robert Whaley - Out of prison, out of basketball, out of shape. 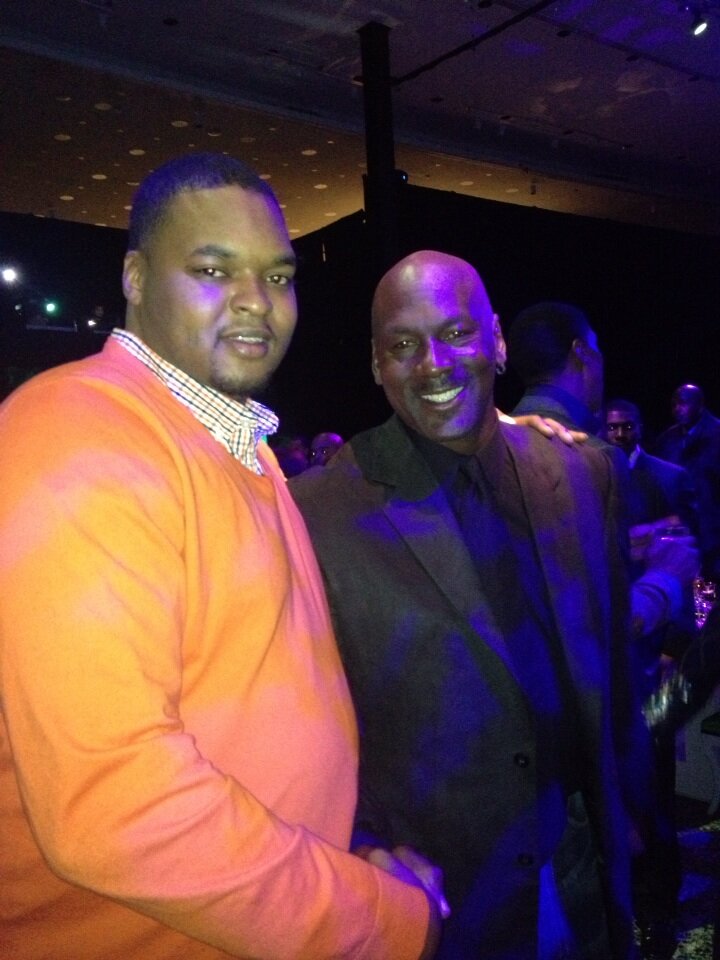 Robert Whaley - Robert Whaley is currently in prison, sentenced to a minimum of 16 months for his charge of running a drug house, dating back to 2008, for which he was finally arrested last March. On the Michigan government corrections website, Whaley is listed as 45lbs lighter than he was in his playing days.

Robert Whaley arrested for carrying drugs in his arse

The cheerful looking sausage in this picture is former Utah Jazz and Toronto Raptors big man, Robert Whaley. You may remember him, or you may not. But if you do, it's probably because either:

a) you're a Cincinnati Bearcats fan who remembers Whaley for the one year of fail he brought your team in 2003-04 before being forced to transfer due to off-the-court issues,

b) you're a Raptors fan who remembers Whaley's inclusion as a throw-in in the trade that ended the Rafael Araujo Experience, or

c) you're a Jazz fan who remembers Whaley as being the fat one that was arrested alongside Deron Williams back in 2005, in an incident that saw them humiliate and besmirch themselves by giving false names to the police.

Either way, your memories of Robert Whaley probably aren't great.

A recurrent theme in that list, other than fail, is Whaley's trend of getting involved in off-the-court issues. Largely unbeknownst to me until today, Whaley has been making a habit of that over the last few years. In the early hours of this morning, per the Salt Lake Tribune, Whaley was a passenger in a car when he was arrested by "gang detectives", whatever they are, and found to have marijuana in his buttocks. Upon being processed, it also turned out that Whaley was a wanted fugitive in the state of Michigan after being convicted of running a drug house back in 2008. The obligatory mugshot follows.

2008 also marked the last time Whaley played professional basketball. And his career, dating back to the end of his high school years, was not exactly dignified. After almost winning Mr Basketball in the state of Michigan in 2001, Whaley spent two years at Barton County community college, averaging 16.9 points and 7.7 rebounds per game, before moving to Cincinnati for his junior season. Once at Cincinnati, Whaley had more field goal attempts than points scored, and grabbed only 4.3 rebounds per 40 minutes, before being kicked off the team and forced to transfer.

Whaley moved to Walsh University, a team in the NAIA (and, not coincidentally, then-Cininnati head coach Bob Huggins's alma mater), and things finally improved a bit. Considering how far he'd moved down the basketball ladder, they rather had to. Whaley averaged 19.9 points, 7.5 rebounds and 2.2 blocks per game, was named the NAIA Division 2 player of the year, and led Walsh to their first and only NAIA National Championship. That, plus the magical word "potential", was enough to get Whaley drafted that summer 51st overall. No matter that he was a terrible rebounder, wouldn't play defense, was out of shape, was highly inconsistent, had a terrible attitude, suffered from big turnover problems and multiple off-court issues, had rarely played to a standard worth a damn, and hadn't played well when he did; he was a scoring big man who moved OK. And that's what the NBA needs most.

Whaley's first season in the NBA was also his last. It started ominously when Whaley earned himself a two game suspension for throwing a punch at Adam Parada (then on the Lakers' training camp roster) in a preseason game. And then when he started playing, it got no better. In 23 games, Whaley averaged 2.3 points, 1.9 rebounds, 0.6 turnovers and 1.8 fouls per game, shooting 40% from the field and 50% from the line. For per-36 minute fans, that's 8.3 points, 7.3 rebounds, 7.0 fouls and 2.6 turnovers. Whaley then missed the majority of the season after knee surgery, and then topped off his season with the incident with Williams. Robert and Deron were both with a class C violation for lying to police after an early morning altercation at a club. A Denver Nuggets fan with the slightly awesome name of Affan Arslanagic (sounds more like a suppository) started having a go at Williams and Jazz team mate Robert Whaley in a club, eventually throwing a bottle at them. All three got thrown out of the place, but the fight continued in the street. When police arrived, Whaley said that his name was "Bobby Williams", and Williams said his name was "Torrey Ellis". It didn't work.

At some point in the altercation, Whaley also cut his hand. He then lied about this to the Jazz, claiming that his infant son accidentally cut it with a knife. His cunning ruse was soon rumbled, however, and he was fined and suspended for two games by the team.

Robert Whaley arrested for carrying drugs in his arse

[...] After the season ended, the Jazz traded Whaley as filler in the Kris Humphries/Rafael Araujo swap before draft night 2006. The Raptors two weeks later before draft night. Whaley has never sniffed the NBA again. He played on the Jazz's summer league team at the Rocky Mountain Revue in 2006 - even after they had traded him away a mere month before - and then split the 2006-07 season between the Dominican Republic, the ABA and Iran. In 2007/08 Whaley went to the D-League, but in 21 games with the Los Angeles D-Fenders he averaged only 4.2 points, 2.9 rebounds and 2.8 fouls in 12.9 minutes per game. This was the last professional basketball gig of his career; as outlined at the top of the post, it appears he found a new source of income elsewhere.

Whaley's criminal history also includes two felony counts of aggravated battery after partaking in some kind of brawl in 2003, to which he was sentenced to a year's probation. And that history is perhaps highlighted - if that's the right word - by a rape trial in 2001 involving a 13 year old girl. Whaley was eventually acquitted in that case after a mistrial was declared, but that's what first crippled his stock and necessitated the two years at community college.

You're getting the idea by now, though. Robert Whaley has spent his adult stumbling from fail to fail. In fact, in a mini Twitter homage, we may now have to call him Failwhale.

Speaking of Twitter, Robert Whaley appears to have an account there, and he didn't even use an alias to do it. On it is what appears to the harrowing story of his son being knocked down and killed by a car this summer, as well as some slightly clingy messages to current Jazz players. Whaley has not used the account for a while, and he's probably not going to do so soon either.

Nevertheless, if I can find Robert Whaley just by searching Twitter, why couldn't Michigan State police?