Fab Melo - It's hard to have much worse of a rookie season than Melo did, the only highlight of which was a D-League triple double. Out of the league after only one year, camp contract with the Mavericks didn't end well, due to their 15 guaranteed contracts, and he has yet to join the D-League. Melo will no doubt get multiple looks in the future, but he needs some stability to develop first.

In 33 D-League games this season, Melo posted averages of 9.8 points, 6.0 rebounds and 3.1 blocks in only 26 minutes per game. That intrigues. There's a fair way to go - those numbers aren't dominating, nor especially close to it, and there's reasons he played only 26 minutes per game, not least of which is the 3.3 fouls that came with them. But Melo is a piece for the future, and even if he doesn't work out as a piece for the future, you stick with him in the belief that he will be. That shot blocking can't be taught.

By the way, here's what Fab Melo would look like with only one eyebrow. 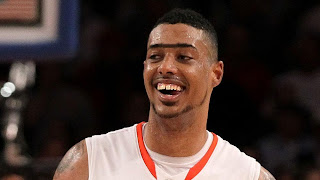 Pick 22: Boston picks again here, yet for some reason we have to wait another five minutes and change before they do. Couldn't they call in the two at once? Moments like this are why the draft starts to drag. Nevertheless, the Celtics eventually pick Fabulous Carmelo, giving themselves a product big with Mouhamed Sene or Omer Asik potential (or, if you'd rather think highly, Dikembe Mutombo potential).

Melo went from being a complete disappointment in his freshman season to a partial disappointment as a sophomore. He finally figured out how to defend in the zone, which won't help him whatsoever in Boston, yet he developed little offensively, fouled a ton, and rebounded fairly sedately for one so physically dominant. Furthermore, as his production increased, so did the drama, including being suspended for the NCAA tournament due to academic issues. Relative to expectations, Melo didn't really work out in Syracuse. At least by being drafted this late, expectations in Boston are quite low.

If Kevin Garnett returns for Boston, and Melo (and to a degree Sullinger) want it enough, they're about to get quite the education.

[...] Alongside Jackson on the cowbell, highly touted brilliant named 7'0 Brazilian freshman Fab Melo has been a complete washout. He cannot score, he cannot rebound out of the zone, and he cannot defend in the zone. Save for one late season offensive showing against bottom feeding DePaul, it's been a nothing season for him. Instead, it is Syracuse's other freshman big, Baye Moussa-Keita, who has been the impressive one. BMK is very long and athletic, and loves to use it - he runs the court, crashes the glass, and tries to block everything. At this point he is very offensively limited, and rather easy to outmuscle, but the potential is apparent.