Signed in Turkey - Signed with Ormanspor 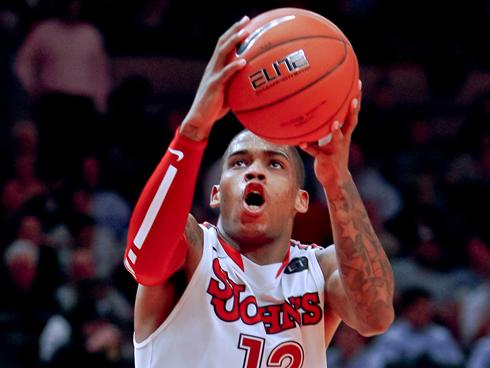 Dwight Hardy - A terrific run of scoring down the stretch of his senior season saw Hardy play his way into contention for the late second round of the draft. The 6'1 junior college transfer is unashamedly a small scorer, not a point guard, yet he was called upon as both a primary ball-handler and backcourt scorer, and responded well. On the year, Hardy returned a 18.3 scoring average, but alongside only 1.9 assists, with a negative assist/turnover ratio. Nevertheless, after a medicore first season and a half with the Red Storm, Dwight played the entire game against the #1 ranked Duke team, and scored 26 points in the huge upset win. This opened the floodgates, and Hardy went on to average 23.4 points per game over the team's final 18 contests, combining regular season Big East play with the Big East Tournament, as well as their one NCAA tournament game. He made himself, and his team, relevant.

However, moreso than most other undersized scorers (hence his inclusion on the shooting guard list, rather than the point guard one), Hardy is a scorer. If called upon to run any offense, he can't. He can get his - he's an improved and decent outside shooter, deadly in transition, and fearless at attacking the rim, with the ability to find his own shot and relentless aggression. But for whatever reason, said aggression disappears on the defensive end, where he is already hugely disadvantaged by his size. That then leaves a small scorer, who can't run an offense, who won't defend, and who may be hampered once he regularly faces bigger defenses.

Clutch as hell, though.

Leading the pack is 6'2 scoring guard Dwight Hardy, who has had some phenomenal games this season. Hardy is the St. John's player most able to create his own shot, the one they turn to when they need a basket, the one they go to down the stretch. He is only a decent shooter, but he's a great scorer, able to get into the paint and finish, despite his small stature, willing to take contact and get to the line. Hardy is a decent defensive player, too, and he has assumed the leadership role and filled the star-power void that the Red Storm have lacked in recent years. He didn't drag St. John's here single handedly, but they wouldn't be here without him.

View other Signed in Turkey players