Reeves Nelson - Nelson has only played four games this season due to the suicide of his father, but he has been very productive in those four, putting up 53 points and 26 rebounds in 73 minutes. He is undersized and infamously temperamental, but he scores from inside and out, and he plays hard. 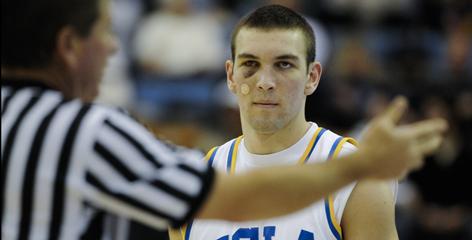 Reeves Nelson is nothing if not fearless.

Also in the frontcourt, 6'8 forward Reeves Nelson is amazingly effective for a slow, grounded, undersized interior player. Nelson is a fighter, a hustler and a competitor, strong and fearless on the interior; most importantly, though, he is skilled. Nelson gets open off of cuts and pick-and-roll situations, as well as creating in the post and sticking occasional mid-range jumpshots. He'll break plays at times and throw the ball away, but he leads the team in scoring at 13.9ppg, and gobbles up rebounds, leading the team there as well with 9.0 per game. Of course, the lack of speed means big time defensive concerns, which aren't usually something UCLA accepts. How Ben Howland figures he'll be able to play his usual brand of defense based around Nelson, Smith and the two Wear twins (currently redshirting) is unclear.