Despite doing the same sort of thing he has always does - and being underappreciated along the way - Henson went to the bench again, because the others in front of him were better. Tried to counter by taking more jump shots; what had been roughly 1/12th of his offensive game previously became about 1/5th this year. Shot 21.7% on them. Wasn’t a positive trend. Henson can come into any game, jump around a bit, drop some lefty hooks (53-100 shooting on hooks this year), rebound a bit, and try to block some shots (well, in previous years at least). He needs to stick with the screening and diving game, running the court, further improving the free throw stroke (sporting a big improvement to 69% this year) and working on the pick-and-roll defence. While the team needs to work on trading him.

Player Plan: Three years and circa. $31.75 million remaining with no options. That’s a decent enough price for a third big, which Henson can be, if not here. It seems likely that either him or Monroe will have to go; Monroe might have the bigger trade value, because he’s better, and provides a rarer skill set, but he’s also expiring sooner. Pick your favourite.

Pick 14: Milwaukee, who had just traded down to get Sam Dalembert, were reported to be trying to trade back up in order to get John Henson. As it turns out, they've gotten him anyway.

Between those two and Ekpe Udoh, Milwaukee has an exceptional shot blocking trio of length and athleticism, if not a great deal of girth. And between those three, Larry Sanders just lost his job. Henson also continues a strong Milwaukee pedigree of right handed big men who are really far better with their left hand. This seems relevant. 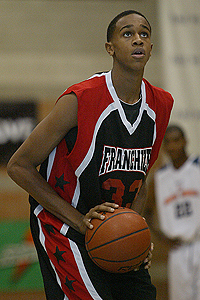 Even here, you get a feel for how long Henson's arms are.

Now a junior, spindly big man John Henson has started to come on. He is very athletic and unbelievably long, a combination he uses to be one of the very best shot blockers in the nation. Henson records 3.1 blocks per game in only 26 minutes a night, and piles in a further 10.1 rebounds on top of that, sensational per-minutes production in both categories. He is also developing offensively, throwing out a couple of post moves on occasion, being a better interior passer than his numbers would suggest, making at least 4 jumpshots on the season, and having quite a strong left hand for a right handed player. Indeed, his right hand is the bad one, as evidenced by his terrible free throw shooting (47%). And as is always the case for one so thin, toughness and ability to handle physical play is an issue. But Henson has made himself a lottery pick if he comes out this season, and his stock will only increase as the Tar Heels's tournament run goes on.